An Open Letter to You Math Types

I am hereby calling for the return of all the letters of the alphabet that you math types have stolen.  Yes, you heard me.  I discovered this blatant disregard for property in the 8th grade when I found a little lower case y hiding under a line, next to a 4.  Shivering, probably.  The teacher, who should have been dialing 911 if they’d had 911 in those days, hadn’t even raised his eyebrows at this wrongdoing, and was in fact urging us to guess what number it stood for.
And why a y?  Was he trying to make a pun?  Math types are not known for clever puns (though they think they are), and this possibility only served to introduce another distraction to math class, next to a rattling air vent, underarm stains in the teacher’s shirt, a tapping pencil three desks back, and a tiny fleck in the window (possible bullet hole?).  Wasn’t it hard enough to combine numbers the right way without having yet one more reason to jump off the track and think of something else?
It’s not as if there aren’t plenty of symbolic substitutes.  You could use hearts, stars, squiggles, and a plethora of other graphic options before resorting to sacred letters!  Above all, why use x so often?  X means “multiplied by” and thus slipping it in where you don’t mean that seems especially cruel.  Soon there were m’s, a’s, b’s, d’s-- virtually a dozen evidences of larceny on one page alone. 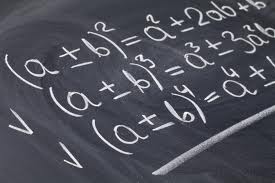 You people cannot come riding into Alphabet Land like masked marauders, snatch a little lower case n from her crib, and then gallop off into Math Land and stick her next to an equals sign.  Not on my watch. So I’m blowing the whistle. Put all the numerals you like in brackets and label it a set if you feel better.  Do not mix this set with alphabet letters.  This is akin to pouring ketchup on ice cream, or frosting on a steak.  They do not go together any better than your plaid, polyester pants and your cotton gingham shirt.  And if you can’t group like objects, don’t you need to go back to kindergarten?  Even they can tell you not to wear an orange shirt with a maroon tie.
Admit that you made a mistake.  Apologize to the word people.  We are forgiving types.  Well, mostly.  We certainly don’t substitute numbers for letters, if that’s any sign of character, and I think it is.  We don’t talk about Alice in 1derland.  We don’t write 2morrow or 4ever.  We follow the rules and leave you in one peace.  We also make better puns.

Email ThisBlogThis!Share to TwitterShare to FacebookShare to Pinterest
Labels: math