Springtime for a Few Minutes


And that’s a whole lotta love to pack into the 10 days or so of Spring we get in Rocklin.  Rocklin is a suburb of Sacramento, so named because it used to be a gigantic granite quarry.  Why they couldn’t call it Rockland and keep me from having to spell it over the phone so often, is anyone’s guess.  Please don’t say laziness.  I hate laziness.  But don’t say it’s a misspelled version of Rockland because I hate misspelling even more.  Either way, it’s a Fred and Wilma Flintstone kind of place, with streets named Lava, Cobblestone, Pebble Creek, Blackrock, Granite, Onyx, Crystal, and the like.  I could easily learn Wilma’s giggle and wear a leopard-print dress and a necklace of ping pong balls, so I’m okay in a rock-themed town.
But I digress.  I was talking about Springtime (cue the music), and was just getting to my complaint that it fades all too quickly into summer here in Rocklin.  One day it’s balmy and blissful, and you have this in your front yard: 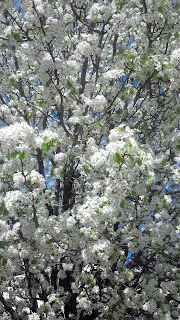 which makes you remember singing “Popcorn Popping on the Apricot Tree” as a kid, and you still sing it every Spring, only now you sing it quickly, because the next day the blossoms fall into what look like piles of soggy shredded wheat on the walkway and the next day summer hits like an open furnace.
In addition to rocks, Rocklin also has meandering wetlands and meandering hillsides of weeds that will pose a fire hazard soon, so people bring in herds of sheep to munch it down.  (Although, correct me if I’m wrong, does that not also fertilize those same hills and perpetuate the problem?)  No matter—it’s fun to step out on your porch and pretend you’re in Switzerland, as you hear a chorus of baa’s just a block away.  Here’s the latest batch: 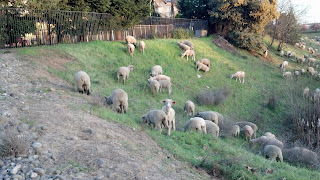 Few things are as adorable as a baby lamb, but let me tell you that few things are as icky as grown sheep.  Okay, pigs are.  They win.  But grown sheep are not part of my Springtime Fantasy and I’ll tell you why:  I have actually sheared one.  I know, I know, this is very un-Joni-like, but it is true, and here’s how it happened.
When I was in college, living in L.A., I was friends with a newspaper photographer and he asked me to write up a story about what it was like to shear a sheep, probably just to fill space.  So we headed out to a local agricultural college in Woodland Hills, called Pierce College, where he had arranged for me to have this delightful opportunity.  Baby lambs were promised, so of course I consented to go.
But soon the baby lambs were whisked away and I was inside a barn with an electric shearer, a grown ewe, and no clue what to do with either one.  Turns out you straddle the poor animal, trying to hold it between your legs so it won’t run away, and then you wrestle the shearer, which writhes from a cord resembling a boa constrictor, and try to shave off the wool in large, clean strips.  Contests in Australia, they tell me, yield champions who can do this in two minutes.  I am looking at two hours.
At first I am scared (dare I say sheepish?) that I will cut the ewe into bits, so I barely touch the clippers to its wool, and little feathery wisps fall onto the ground.  Over and over I try to do it carefully, and within minutes I am exhausted, if only from trying to hold the animal still.  I finally realize I will be here for the rest of my life if I don’t get brave and just dig in, so I press the shearer against its skin and now the wool is falling off in giant chunks.  It still looks like the worst haircut known to man or sheep, but at least I’m making progress.
Until I notice the bleeding.  “Oh, no!” I shout.  “Am I cutting the sheep?” There are flecks of red all over its skin.
And now get this:  The person in charge (the shepherd?) says, “Oh, don’t worry about that.  Those are just ticks you’re cutting in half.”
WHAAAT?  Ticks?  As in the one insect even more disgusting than spiders?  I look closer and sure enough, the sheep is covered with hideous little black pests scurrying about under its wool, and I have been shaving right through them.  I no longer worry about cutting the sheep; my biggest worry now is whether I will faint, throw up, or be covered with ticks myself before I can get out there.  It’s all I can do to finish scalping this poor, flea-bitten creature, and let it scramble out into the sunlight.  I follow her on wobbly legs and stagger to my car.  The things you do just to be a published journalist, right?
So now I listen to the sounds of Springtime in Rocklin with a little bit more information, a little speculation about why the sheep baa so much.  You would, too, if you were covered with ticks.  And believe me, I think twice about pulling on a wool sweater now.  Lucky we’re heading into summer.
Time is TICKING (sorry), so hurry to the box on my website where you can subscribe!  And be sure to order my newest novels at  http://www.amazon.com/Joni-Hilton/e/B001IXU7A6   or in paperback versions at this link:https://www.createspace.com/pub/simplesitesearch.search.do?sitesearch_query=Joni+Hilton&sitesearch_type=STORE
Posted by Joni Hilton at 5:33 PM