15 Signs that it's Just Too Hot

I love Sacramento except for a few days a year when we get triple digit temperatures.  All this week the Mercury’s hovering around 109, and it’s even higher than that in Las Vegas and Phoenix.  Across the nation people are sweltering, and if you add humidity, it’s even worse.  Here are 15 signs that you’re living where it’s just too hot:
1-       Your makeup slides down so far that your eyebrows now look like a mustache.
2-      You buy two bottles of water—one to drink, and one to pour over your head.
3-      Your pantyhose ignite from your legs rubbing together. 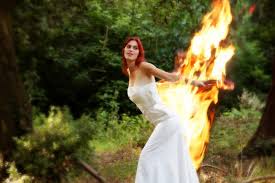 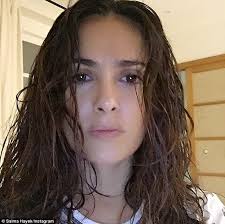 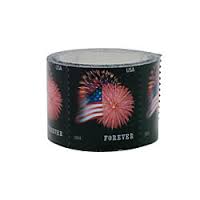 10-    Hose water burns your flowers.
11-     You spend your lunch hour standing in front of a fan display at a department store, or wandering the freezer aisle of the supermarket. 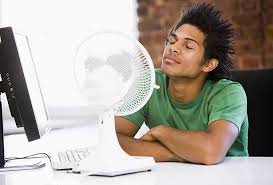 12-    Your car registration sticker slides off the license plate and you get a ticket.
13-    Your sunburn has a sunburn.
14-    You invest in a sunscreen company.


15-     You realize no kids will be born nine months from now.
Speaking of hot, my latest LDS novel is hot off the presses-- it's called GOLDEN and you can read more about it here.  Watch what happens when the Waterson family takes on the spooky Witch House-- as a ward project.  Available in paperback on Amazon.
Posted by Joni Hilton at 7:00 AM 4 comments:

Email ThisBlogThis!Share to TwitterShare to FacebookShare to Pinterest
Labels: hot weather, too hot

I love the library.  I still borrow books there, and love the feel of the crinkly plastic jackets and the powdery edges of the pages, which I know have been softened by many readers before me.

Last week I was in line just as a mother joined me, her little girl holding one of The Boxcar Children books.  “Oh, the Boxcar Children!” I gasped.  “I love how they speak to each other!” Maybe I was a tad louder than is library appropriate. 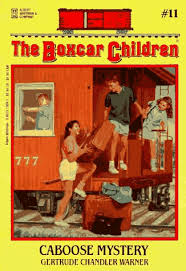 “You go first,” I said, mimicking the characters.  “No, you go first.”  It’s a mother’s dream to have children who act like this, who offer the last cookie to their sibling, or hold open the door so their brother can go first.
“Here—let me do the dishes for you.”
“Shh… let’s all be quiet so she can sleep.”
Neither the mother, nor her daughter, joined in my elation. Maybe they actually have a Boxcar family and talk with utmost generosity all day long. Maybe the kids iron one another’s clothes, and hurry up in the bathroom so a waiting brother can use it. 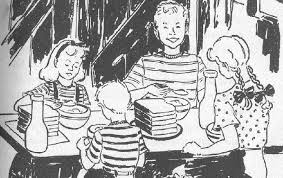 I have no idea how many novels about Henry, Jessie, Violet and Benny I read as a child, and then read to my children, hoping their incredible courtesy would rub off. A woman named Gertrude Chandler Warren invented them back in the 1920s, and they have remained popular for 90 years.  Partly it’s because they’re orphans (though no details explain why), and they survive on their own.  More resourceful even than MacGyver, these kids figure out how to cook, clean, repurpose garbage, travel, make money, live in a boxcar, solve crimes—and do it all with a wink and smile. 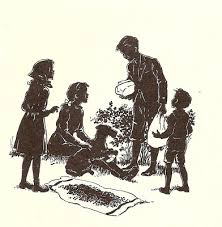 “We Aldens always seem to have an exciting time on vacation no matter where we go,” one of them says in their Schoolhouse Mystery. This is a far cry from, “Are we there, yet?” or “I’m not having any fun here!” 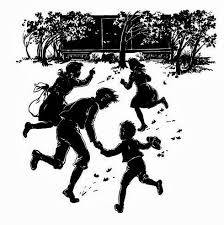 And so I picture that mother and daughter sitting down to enjoy The Boxcar Children and I wonder if the mom will do what I used to do, and think about the hobos who used to ride the trains, and wonder if maybe they were onto something.  If nothing else, a great attitude.
On the other hand, there’s my comedy novel, Sisters in the Mix, about two women who couldn’t disagree more.  One has both OCD and a TV cooking show, and the other is a free-spirited artist who comes to live with her.  Check out what happens here.
Posted by Joni Hilton at 7:00 AM No comments:

Have you ever given advice to someone, only to find out they never took it?  And then have they continued to ask you for advice, and continued to ignore everything you say? 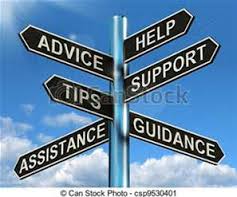 Welcome to Joniopolis.  I have often found myself, after great thought and even considerable research, offering suggestions to people who come to me with their problems.  And sometimes they listen.
But often I realize some folks just like to vent.  A friend of mine calls these people “Professional Victims.”  They aren’t really looking for solutions, they just thrive on drama and the re-telling of their sad tales.

Even better, this same friend shared a tip with me for getting out of the advice rut.  It’s something attorneys use in depositions.  Someone brings up something that’s already been addressed, and they say, “Asked and Answered.” 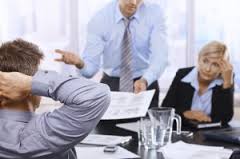 Brilliant, right?  And you don’t have to be quite so abrupt, but you can still point out that we’ve had that conversation and I’ve already given you some ideas. Then you don’t keep circling around and giving the same counsel over and over.  You could even use this to streamline meetings at work, discussions in committees, and all kinds of private conversations.
In fact, I was so excited about this tidy new approach to make life more efficient that I shared it with St. Bob.  But no sooner had I done so, than I said, “When are we having the Smiths over?” to which he said, “Asked and Answered.” Oh, yeah.  We were going to wait another week until he knows his schedule better. 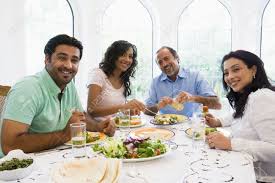 Then I said, “Are you sure this blouse looks alright?” to which he said, “Asked and Answered,” and then that evening I said, “Wouldn’t you like me to fix some dinner?” and again heard, “Asked and Answered” because he'd had a big lunch and wasn’t hungry.
I called my friend.  “I have created a monster,” I reported.  “Now he’s using this thing against me.” 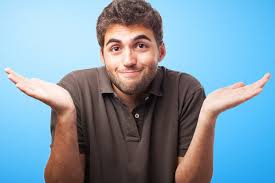 So I’m just saying, it’s great to learn a new technique, but watch out if you tend to repeat your own silly self.  Or that sword could end up in the wrong hands.


Hey, check out my website—not only can you find books to buy, but hundreds of YouTube Mom videos to watch, maybe even one telling you how to deal with smarty pants spouses.
Posted by Joni Hilton at 7:00 AM No comments:

Okay, everyone here who has been hit by a semi, raise your hand. 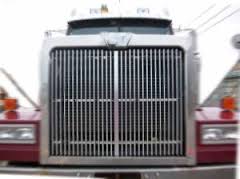 Nobody?  Exactly as I thought.  I, however, have joined this illustrious group thanks to a guy swerving into me three weeks ago. Honestly, I am convinced I will never run out of material for this blog.
He was driving one of those flatbed semi trucks with eight wheels on the back, like this one: 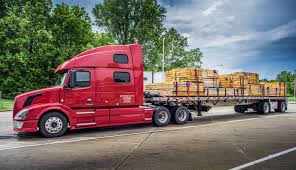 We were both at an intersection, in two lanes that were both allowed to turn left.  I was in the inside lane, and made the tight turn you’d imagine, to keep away from the monstrous big rig beside me.
And he should have swung wide to avoid snagging me with his back tires, but alas, despite hugging the median as best I could, I soon saw the flatbed and tires coming awfully close to my window, and then BAM!  My car bounced to the left.
We both pulled over and I was sure the entire right side of my car would be crunched in when I walked around to survey the damage. Yet, incredibly, it looked great!  Well, except for a huge circle of dirt his tires had left on the door. He had also snapped the outside mirror back, but he gave it a quick slap and it was in proper position again.
He and I were both hugely relieved, we exchanged information, then went on our way.  After I arrived at my destination, I thought I’d take a closer look at that mirror.  Yikes.  Sure enough, he had scraped the paint off the frame in the lower left corner.  I had no choice but to call his company. 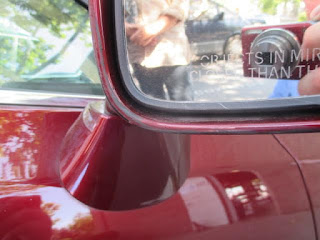 And, I must say, I have never dealt with a more cooperative trucking firm.  Actually, I have never dealt with any trucking firm, but if this is any indication, these folks are all wonderful people you would gladly have over for dinner.
I went in for an estimate, and discovered there actually were a few slight dents in the door, which you could see better in the wavy reflection of a striped card. 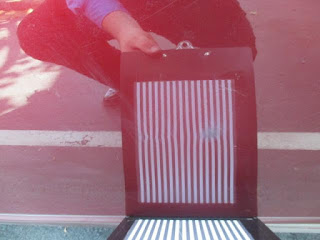 Okay, so we still came in under a thousand bucks for repairs.  And considering these semis weigh 12 or 15 tons, I think I had a guardian angel watching out for me.  Of course, we can always quote my friend, Teru, who noted that it would be best if he’d keep me out of trouble entirely, and once said, “Maybe your guardian angel has a drinking problem.”
It’s entirely possible.


Stay off the highways and curl up with one of my books!  For hair-raising adventure without damaging your car, I recommend Jungle, a romance set on an uncharted island with bizarre creatures, cannibals, murder and mystery.
Posted by Joni Hilton at 7:00 AM No comments: