Sometimes people ask me when I find time to write.  And it’s pretty much when everybody else is at the gym.
If you’ve been following this blog, you’ve read my thoughts about visiting a gym here, and trying a spinning class here. From the time I was a wee child—okay, a teenager in high school—I have been finagling my way out of gym class, even getting a doctor’s note one time. But now (drum roll here) I am thinking about opening my own fitness place!
Here is my plan:  First of all, we rename it.  Joni’s gym will be called FITLESS CENTER.  It will only cost ten bucks a month, and you do not need to buy workout clothes, a gym bag, or special shoes. You just need to walk in the door and sit down. 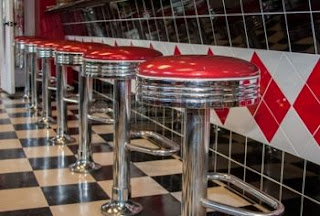 All the stools will spin, and you can spin round and round without working up one drop of sweat.  You will notice these stools are very close to a dessert bar where you can enjoy any number of donuts, pastries, and ice cream confections. 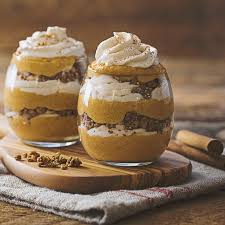 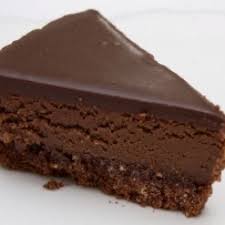 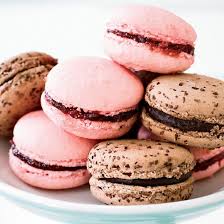 Behind the waiters will be a mirrored wall where you can see how happy everyone there looks. 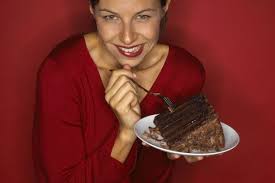 You will immediately notice the stark contrast to the expressions at the “other gym” and you will smile. You will even think how CrossFit makes you Cross and Fit, a combination that is not worth it. 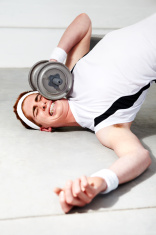 You can wear ear buds if you wish, but then you might not hear the specials (Meyer lemon cheesecake, salted caramel truffles).  There will be lots of lively conversation, because this is a happy place filled with happy people.  When you leave, you will not have to wipe down any equipment or take a shower.  No one will make you feel inferior by talking about how much they lifted that day, or when their next marathon is. Instead, you will all recommend delicious dishes to one another, and feel the joy of sharing a great tip for next time.
You will drive out onto the street, and somehow no other drivers will irritate you.  The sun will shine brighter, the trees will look greener, and all will seem well with the world. I think I'm onto something here.


And then you can go home, read my new book, GOLDEN, and the day will be perfect.  Order it in paperback or on Kindle.
Posted by Joni Hilton at 7:00 AM No comments:

I Scream, You Scream

It’s summer.  It’s hot.  It’s time for ice cream.  Those three sentences follow in absolutely logical order, if you ask me.
And I once had the thrill of a lifetime, by getting to tour a Dreyer’s Ice Cream plant in Texas.  This rich ice cream is labeled “Edy’s” in the East, so you know we’re talking crème de la crème, folks.  And it all happened thanks to our son, Cassidy.
First, in case you’re new to this blog, I must tell you that I often enter recipe contests and cook-offs.  And it’s been an absolute kick to win trips, appliances, furniture, and cash.  So a few years ago, one of our sons (then age 10) followed in his mom’s footsteps and entered a Dreyer’s Grand Ice Cream contest called “Invent Jeff’s Next Flavor,” one Jeff Gordon of Nascar, would personally select.  Dreyer’s listed the basic things Jeff liked, and Cassidy came up with Cool Fuel, a “cool minty ice cream with streaks of fudge and injected with almonds.” 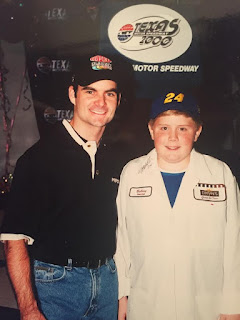 Out of 8,000 entries, Cass was selected as one of five finalists!  And the only child in the competition.  He was able to bring a couple of friends and we all got to tour the ice cream plant in Texas.  Oh. My. Goodness.
It turns out that the peak moment of flavor is just before they freeze it for shipping, when it’s still soft.  They let us sample wonderful flavors, using the lids as a spoon.  Once it’s in the supermarkets, it will never be at such a perfect, soft state again.  This is the stuff of heavenly dreams, folks. 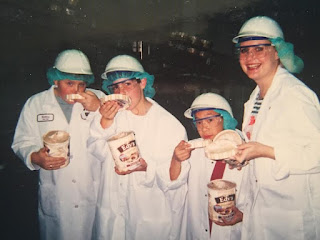 Then they allowed each contestant to whip up their idea in the kitchen.  It was glorious. 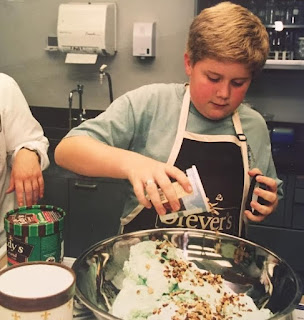 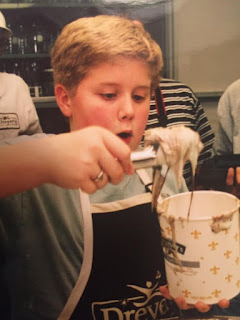 That evening Jeff went down the line.  After he had tasted them all, he pointed to Cassidy’s, and said, “I really like that one,” at which point the man in charge pulled him aside and soon Jeff was choosing a similar one, but not Cassidy’s.  When I inquired about this later, I was told that the public doesn’t always like “particulate matter” in ice cream, and the “other” one was virtually the same as Cassidy’s, but without the almonds.  I chose not to make a stink about it, declaring a moral victory as it were, and then we were whisked off to an actual Nascar race. 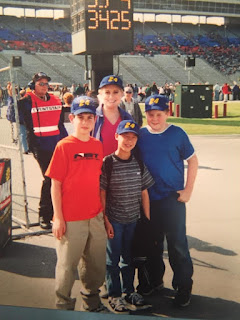 Well… it turns out you can’t enter the pit area if you’re underage, so there we were, disappointed again.  We had to wander around the parking area where drivers kept their motorhomes, as the other contestants got to see things up close.  But then—as if heaven decided to make things right—we happened to be near Jeff Gordon’s gigantic trailer and his top mechanics let us have a complete tour of his digs!  It was awesome.  I was particularly impressed with drawers and drawers of perfectly organized, labeled tools for the mechanics to use.  They showed us the whole place and even opened the fridge. This was a VIP tour unlike any the other contestants were experiencing. We were in Jeff Gordon’s home on wheels! The boys’ eyes twinkled with delight. 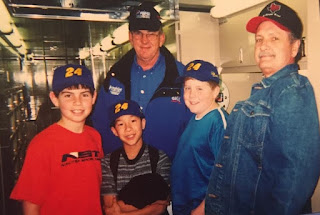 So, even though Cassidy’s picture didn’t end up on an ice cream carton, we had a fabulous time and an unforgettable taste of this glorious confection at its absolute best.  I call that a win-win. 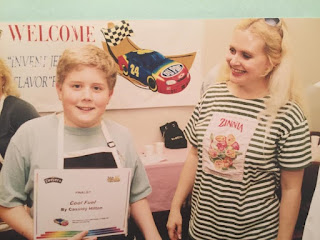 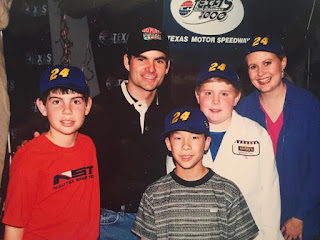 Speaking of Cassidy’s picture, here’s how he looks today, hosting That Late Show, which you can watch here.

And, while you’re enjoying a creamy bowl of frozen wonder, why not read my latest novel, GOLDEN, which you can order on Amazon or Kindle.   And if you’re out of ice cream, make your own in a baggie!  Watch my YouTube Mom video here, where I show you how.
Posted by Joni Hilton at 7:00 AM 1 comment:

Oh boy, oh boy, oh boy.  I love it when a new book comes out, but particularly when it’s a book I wrote.
Allow me to introduce GOLDEN, my latest novel. 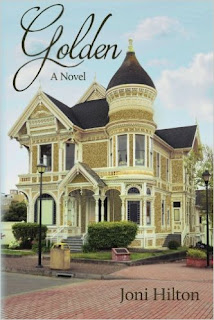 While many of my books are for the mainstream market, this one is for Latter-day Saints-- however, anyone could read and enjoy it.  In fact, whenever I write Mormon books, I write them with that in mind.  I picture someone handing this book to a non-Mormon friend, and then the friend reading it and gaining some insights into what we’re really like (and how funny we are).  I read Catholic and Jewish literature, and shame on you if you don’t love Nobel Prize winner Isaac Bashevis Singer.
But back to GOLDEN.  This is the story of a completely normal family with three challenging children, two parents who are doing their best but are terrified of their new church assignments, and what happens when they take on The Witch House, a local spooky mansion, as a project.  It has everything life offers—tricky relationships, life and death moments, spiritual anguish, consequences of terrible decisions, moments of faith and redemption, chances to grow, even surprises and laughter.
I hope you’ll click on thislink and order it—and then order it again to give as gifts! (Kindle readers can find it here)

Let me begin by saying that I love animated movies.  I know, St. Bob and I are sitting there in a theater full of little kids, but I don’t care because I’m sort of a little kid, myself.  I loved the recent Jungle Book, Zootopia, and look forward to each new batch of cleverly animated shows, sweeping us through the forest or the ocean, impossibly realistic and often surprisingly tender.
But as I sat watching Disney’s Finding Dory recently, I felt uncomfortable.  I even caught myself scowling.  And then I realized why.  It wasn’t because this was some inferior product, or a boring story.  It’s because this is a movie about ME! 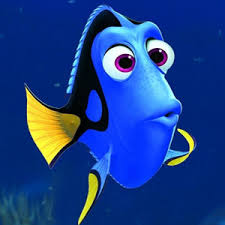 Sure, Dory calls it a “short-term memory problem,” but anyone watching who has to chant a jingle to remember the three things they need in the supermarket, can see this is a euphemism for ADD.
In Dory’s world, it isn’t “Oh look—a squirrel,” it’s “Oh look—a sting ray” but the upshot is the same. And she has to follow shells to find her way home just as I have to memorize what letter of the store sign I am parked beneath, to find my car again. 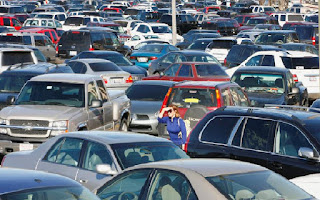 Dory cannot remember a long string of directions, and I share her pain.  I compensate by writing everything down, even my daily schedule.  But poor Dory is a fish and lacks not only opposable thumbs, but any fingers at all, much less a pen and paper. 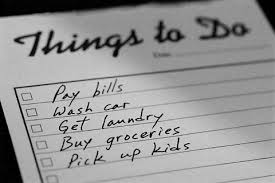 What were we talking about?  Oh, yeah.  Dory.
Over and over I watched Dory suffer through her disability as everyone else swam by, which is exactly how I feel in dozens of everyday settings.  Seeing it on the big screen was amusing for everyone there with a normal brain, but I wonder what the ADD people thought.  There had to be others there with this condition.  Or, maybe they’re like me, and were able to walk out and say, “Hey, popcorn and candy!”

I guess there are certain compensations.
Quick, do this before you forget.  Click here to read all about my latest novel, GOLDEN, on Amazon-- heartwarming, funny, inspiring. Or buy it on Kindle here. Be the first on your block to read it!
Posted by Joni Hilton at 7:00 AM No comments: