St. Bob has long been known for ingenuity. But now he’s done something I’ve never even considered: He dragged the gas nozzle around to the other side of the car: 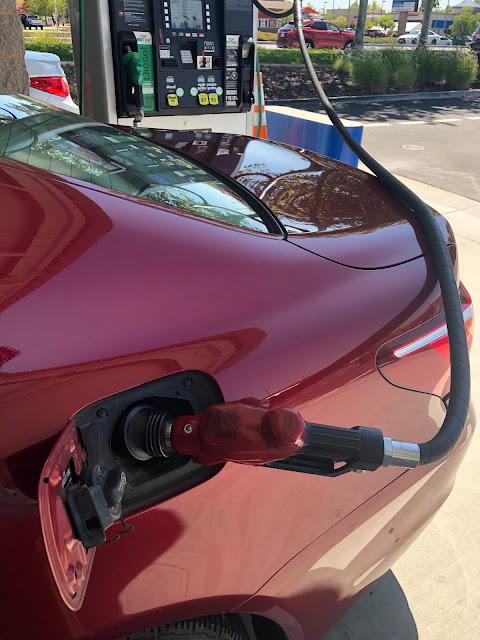 You and I both know there’s a little triangle near the gas gauge on your dashboard that points to the side your gas tank is on. (If you did not already know this, you’re welcome.)  And this is great to have if you’re renting a car, but usually you know if your own car is a righty or a lefty.

However, until now, it never occurred to me that it doesn’t matter. Those hoses are long enough to reach all the way around, exactly as you see above. So, instead of waiting for a slot to open that accommodates your gas tank’s side, you can just pull into any empty spot and drag the hose where you need it. No more long lines! What a time saver!

But St. Bob never performs a miracle without a parting line. This time, when he got back in the car and I commented on how clever he was, he shrugged and said, “I’m ambigastreous.”  Somehow I just don’t think it works as an adjective you’d like to be labeled.

Are you ambi-books-treous? If you want to read more than one book at a time I have dozens for you to choose from, right on my website.

What is going on where I live?  I’ll tell you what. People are transporting CRAZY things. Think I’m exaggerating? Check out this truck, which even brags that it contains venomous snakes. 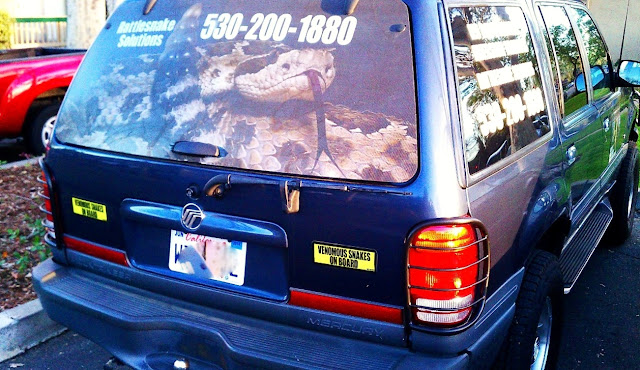 Now, on the one hand, I guess somebody has to rescue you when you’re cornered by a rattlesnake. On the other hand, what if someone leaves the window cracked and they get out and swarm all over the neighborhood? On the other hand, this is a great way to ensure that nobody will ever steal your vehicle.

And then this one says CRYOGENIC, which we all know means there are dead bodies in there, frozen and waiting to be unfrozen. 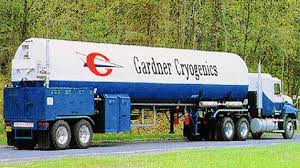 Some folks will tell you this is incorrect, that these vehicles contain liquid nitrogen and cryogenic gases.  SO THEY SAY.  But we’ve all seen the movies. And I can just picture dead bodies stacked up inside there.  What if that truck gets in a wreck, the back bursts open, and corpses come toppling out onto the hood of your car?

OR… this is just someone’s brilliant idea of a way to keep us quarantined in our homes.  I must say, it’s working.

And while you’re inside, check out my Youtube Mom videos. There are hundreds of short life hacks to occupy you while you avoid rattlesnakes and zombies.

I just had my final reconstructive surgery after breast cancer and a mastectomy (all went well, happy with results), but it took A SOLID HOUR to get an IV into my arm. My veins want no part of this. They scoot around, they collapse, and they finally play dead like an opossum. 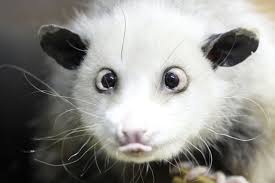 First, the nurse takes a stab—pun intended—at this goal. When that doesn’t work, she tries another spot. Then another. Finally she brings in a vein-finder machine and an additional person. Another swing and a miss.

Eventually an ultra-sound machine is wheeled in, complete with gel. Now a new technician stares at the screen as he feels around in my arm with a needle, looking for a vein that will allow the storm troopers to breach the castle wall.  And, finally, it works.

I told him if he sees a baby in there kicking around, there’s going to be trouble. Oh, and my gender is unchanged. 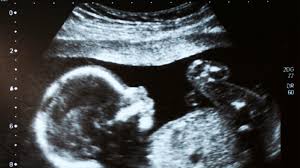 However, my arm now looks like a new bakery item: Eggplant Muffins. Sure, they’ll probably taste weird, but the dark purple splotches definitely grab the eye. 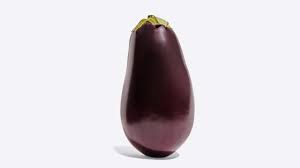 Meanwhile, how about we add a new category for the Olympics: Getting a needle into Joni’s veins? Although I’m not sure I want to volunteer for this.

The best thing to do when recuperating (or just self- isolating) is to read a great book. Find my faves right here!

Okay, everyone has gained their 19 pounds from COVID-19.  So today I’m giving you an easy way to cut down on all the overeating we’ve been doing.

It starts with figs.

Did you know figs have to be pollinated on the inside? This means fig wasps crawl in to lay their eggs, but in the process lose their wings. So the female wasp dies inside the fruit.  YIKES, right?  I mean, an enzyme in the fig breaks her carcass down into protein, but STILL. I promise this is true; you can look it up.

And I already told you that all chocolate bars contain fragments of roaches. The FDA allows anything less than 60 insect pieces per 100 grams of chocolate.  Roach parts are also in popcorn, wheat, peanut butter, fruit, cheese, and pasta.

Insect pieces are in almost everything—canned goods, baked goods, boxed goods, veggies, coffee, tomatoes, spices, fast food. Experts say it’s just the cost of doing business in the food industry. They can’t eliminate ALL the pests, so they decided what percentage is basically safe for us to eat!

But it’s even worse. (Are you shedding pounds, yet?) Some foods’ formulas deliberately add fish bladders, human hair, duck feathers, and a musky/vanilla-scented beaver secretion. Each of these items provides something they want— say, for fluffier bread. 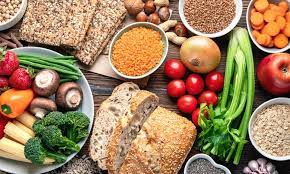 So, not to bug you, but are you gonna eat that last bite of ice cream, or can I have it?

Many of my Youtube Mom videos show you slick tricks for fixing and storing all these foods (be brave), along with must-see life hacks.

Mark Twain is rumored to have said, "The coldest winter I ever saw was the summer I spent in San Francisco."  And that’s exactly how I felt on Friday when I had to go there for ANOTHER Covid test prior to an upcoming surgery.

Unwisely, I wore open-toed sandals, white jeans, a T-shirt and an overblouse. It’s been 100 degrees where I live, and I couldn’t believe this nearby city could be that much colder. I was wrong.

Had we been able to stay inside, out of the chilly wind, it would have been fine. But we had decided to take the train and have an adventure. This also included riding on BART (Bay Area Rapid Transit), which took us to the sketchiest area that Amtrak services.

Lest you wonder what I mean by sketchy, this is a bench we saw: 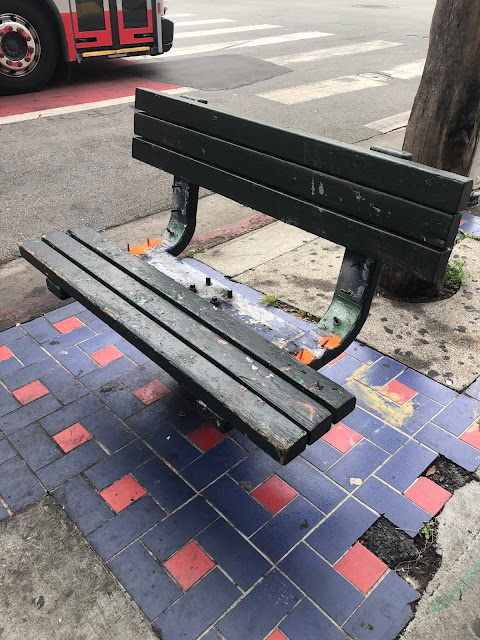 Take a closer look toward the back of the seat. Yes, those are sharp screws sticking straight up. I can only imagine the screams of pain from anyone who might sit down without looking.

We finished up and went back to the train station. Two trains came in simultaneously, and as we were trying to figure out which one would take us home, the correct one left. We now had two more hours to sit on hard concrete benches and wait. Soon Bob decided to use the restroom. But this required going back inside and walking through the station.  I now had blisters from my sandals, and couldn’t walk with him. But I assured him I’d be fine alone on the platform.

For fifteen minutes I kept saying, “Go! I’ll be fine!” to which he would reply, “I’m not leaving you here. It’s dangerous.”  Finally he placed something beside me and took off.  I looked down and discovered his pocket knife. That’s right, a POCKET KNIFE.  Just the thing to defend myself if, say, Crocodile Dundee shows up. 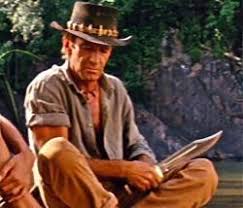 Soon he was back, but now he noticed swarms of ants on the ground. “It’s like Dunkirk!” he said, and began stomping furiously. He looked like a flamenco dancer who has never studied flamenco dancing. 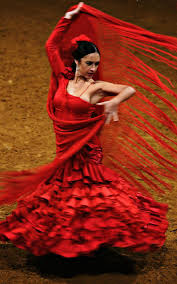 Then my feet were freezing, so Bob emptied out the backpack and told me to put my feet inside. “Here,” he said brightly, “you can just bunny hop over when the train comes.” 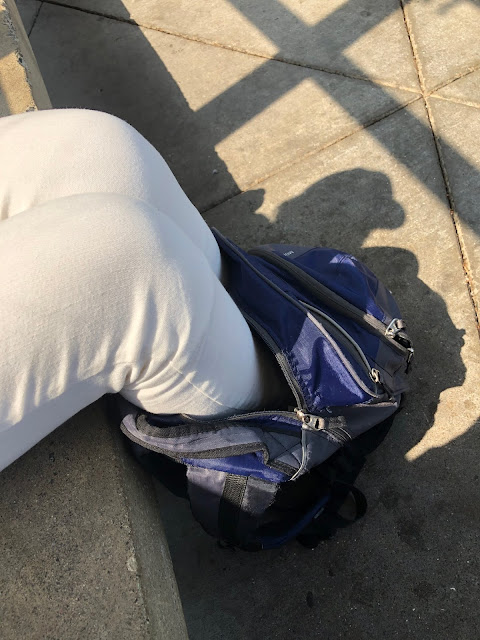 “I am not bunny hopping,” I said. And now I’m mad at myself for not dressing warmly or wearing shoes and socks.

And then he earns his sainthood again by taking off his shoes and socks, and giving me his socks to wear. What a guy. I warmed up immediately. Always travel with a buddy.

And with a good book to read.  I recommend these!