Things I Have Said Into My Fridge

We’ve all done it.  We’ve stood in front of the fridge with the door open, gazing over the offerings as if at a bakery.
Except it doesn’t look like a bakery.  It looks, depending on the day, cluttered, empty, dull, even sketchy.  A plethora of adjectives, but nothing good to eat. 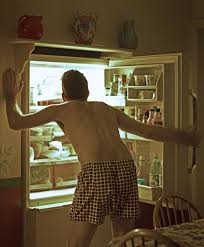 You’d think this wouldn’t happen when you love to cook.  But it happens even more, because we cook yummy things that get gobbled up. And that leaves us gaping at the chilly shelves, wishing something new would materialize.  Occasionally an item works its way to the back, gets forgotten, and becomes a science experiment.  To be sure, refrigerators are receptacles of mystery. 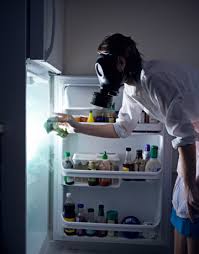 So I kept a record of the things I have recently spoken, as I stood there letting all the cold out.  See if you’ve ever said the following:

Oh, man, no more pie?
What IS this?
That’s applesauce?  Are you kidding me?
Where’s the peach cobbler?
Oh, boy, how old is this Cool Whip?
That casserole looks like the Gobi Desert.
Okay, liquefied lettuce is disgusting.
The cheesecake is already gone?
What IS this?
I don’t care if this salsa is expired. I’m eating it.
How did bread crumbs get in here?
Ah… butter.  What can I put you on?
Where did the strawberries go?
Popcorn? Seriously?
How old is this lunchmeat?
I wonder if this cream is still good.
Why isn’t there some cookie dough in here?
How can this meat still be frozen solid?
I never should have bought that beet jam.
What IS this?

Time to haul everything out, wipe down the shelves, toss the who-knows-what-this-is items, and maybe whip up some more goodies.  Only this time, I’ll hide them in the back of the crisper, behind some wilting celery that will provide the perfect camouflage.


Hey, I have a bunch of fridge tips on my YouTube Mom channel!  Check one out here, then scroll through for hundreds of other short Life Skill videos.
Posted by Joni Hilton at 8:00 AM 2 comments:

Is it utterly impossible for a Hilton to travel on an airline without something ridiculous happening?  Apparently, yes.  Although St. Bob and I are not dead, yet, so I guess we can still hope for an uneventful trip someday.
This time it was Bob.  He was flying from California where we live, to visit his brother in Mississippi.  And, since it was a red-eye flight, he brought  along one of those travel pillows for your neck. 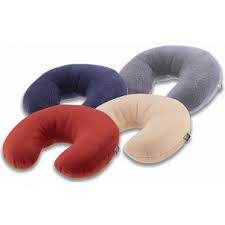 Here is where you stop reading, if you are sharing this story with a child.  Because we all want children to be law-abiding citizens, right?  We like stories that show good guys getting dessert, let’s say, and bad guys getting their just desserts. We do not want kids thinking that the minute you obey a rule, your whole life goes down the toilet.
And yet, here’s what happened.  Bob decided to curl up with his pillow and get a little shut-eye.  Except  there was an annoying tag-- the scratchy tag that tells you not to remove it. 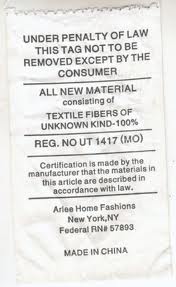 Well, all these mattress and pillow tags also say, if you read the fine print, that the consumer can remove it, so Bob does.  And whammo—the seam splits open and the tiny, styrofoam micro-beads inside explode into the airplane. 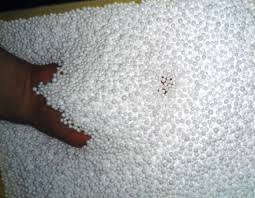 They cover Bob.  They cover his seat.  They cover the floor, and they cover the passenger next to him.  The entire seating area now looks like a snow globe.
Not only that, but these Styrofoam balls stick to you because of static electricity, something exacerbated by dry air, and airplanes are notorious for the driest air you can find.  Bob apologizes to his mortified seatmate, and the two of them begin trying to scrape off the little balls, none of which want to budge.  Like burrs, they hunker down into the weave of these guys’ clothing, and even a sticky lint roller would probably not pull them off. 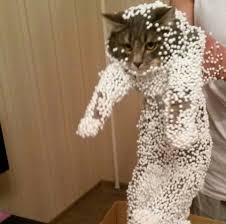 A flight attendant brings a damp towel, but what you really need are eight or nine damp blankets.  It’s a total disaster, and other passengers nearby are scooting into empty seats a good distance away, because spreading into the aisle are clearly round, white cooties.
Bob arrives looking like the abominable snowman, and no one will walk within ten feet of him.  His seatmate is still madly trying to brush off the stubborn little beads.  Bob calls me from the terminal and I laugh for twenty minutes and beg him to take pictures.  He will not.
But I think the city of Jackson should have declared a Snow Day, and sent a TV reporter to interview Bob.  Then I could have posted a video as well.  Pity.


You can read about similar disasters in my novel, Sisters in the Mix, however.  One of them has a TV cooking show and OCD.  Guaranteed to liven up your summer.
Posted by Joni Hilton at 7:00 AM No comments:

Are You a Grammar Nerd?

Today I have a fun chart for you, sent to me by the incredibly nice folks at Grammarly.  Check it out and see if you're a Grammar Nerd! (Then visit jonihilton.com and buy my books!)

Email ThisBlogThis!Share to TwitterShare to FacebookShare to Pinterest
Labels: grammar

A funny thing happens when you decide to enter a competition.  Even one you begin as a lark.  You become, well, competitive. 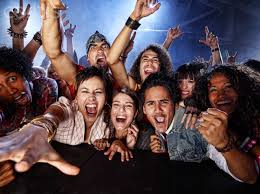 St. Bob was asked to help with a Rain Gutter Regatta at work.  In case you’ve never heard of this, it’s something Cub Scouts do, similar to their Pinewood Derby, but using little wooden boats that they physically blow to the finish line in a rain gutter.  Except it’s now become a fun bonding activity in the workplace, and adults are catching the floating fever.  Personnel are divided into teams, and someone is chosen on each team to design a boat they hope will win. 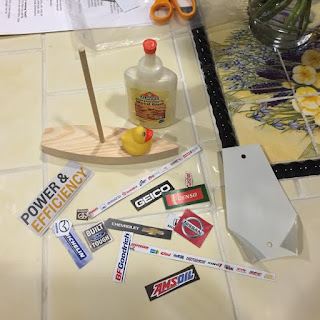 Little blocks of wood are handed out, along with a tiny plastic sail and a mast.  You also get a rudder and a keel, both roughly the size of a guitar pick. You are to sand and paint this silly thing, glue it all together, then bring it back for the big race.  So Bob brings it home and places it on the island in our kitchen.
And there it sits, waiting for its design.  We talk about colors.  We talk about stripes.  And then we decide it needs sponsors, like race cars have.  We clip tiny logos of sponsors from Car and Driver magazine, and glue them on.  We varnish them so they won’t float away the minute they hit water.  But something is still lacking. 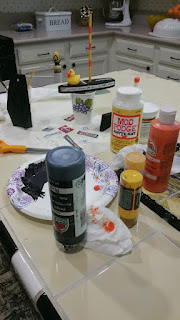 And then it hit me: I have a whole bag of miniature rubber ducks that I give to kids at church who are restless and tired of the stash of toys Mom is offering.  No, they do not squeak.  Although that would be even funnier. 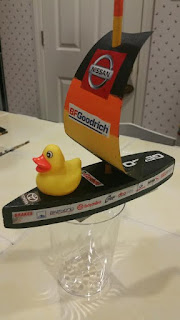 So we glue a duck onto the hull and I think it looks absolutely darling.  But St. Bob wants this duck to look fierce, to have swagger.  He needs a pirate eye patch and we need a Jolly Roger flag.  We add both and decide these are the winning touches that will guide our ship to First Place. 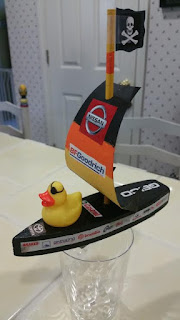 Bob takes it to work.  Whoa.  Not surprisingly, some of the participants have taken this thing very seriously, and have created boats that could grace the cover of Motorboat Magazine. 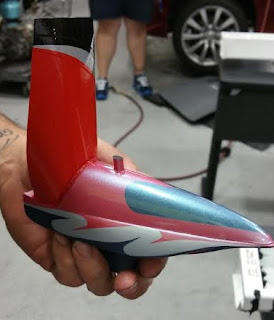 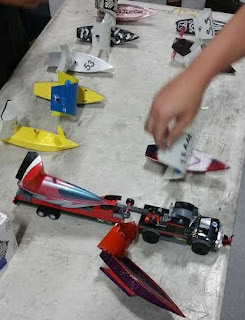 Soon it’s Bob’s turn to put our Quacker into the water, at which point it promptly quacks up and turns on its side. 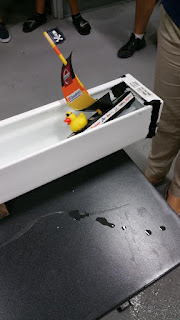 How can this be?  It looks balanced!  Some sympathetic racers offer to glue some tiny weights on, and now it stays upright, at least.  But it competes against one of the ringer boats, and loses mightily. 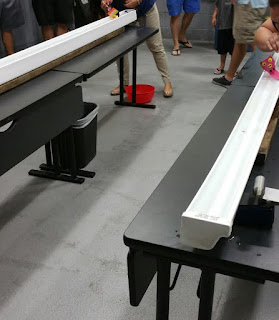 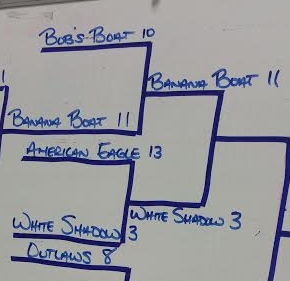 Bob pulls the duck off and races just the duck, but it loses, also.  He glues the duck back on and calls me with the bad news.
“Were we very last place?” I ask.
“I think we might be,” he says, though they do not measure this.
“Then we just have to declare a moral victory,” I say.
“An immoral victory?” he asks.
Either one.  And, at least we have something even better to give to some kid at church, now.  I’d say it’s a win-win.


If you want to see the design I REALLY wanted to give his boat, check out my YouTube Mom video here, and see how I painted our grandfather clock.  Or click here to see photos.
Posted by Joni Hilton at 7:00 AM No comments: