10 Times When it's Okay to Let Kids Quit

It’s the end of summer vacation.  Parents the world over have been hauling their kids to lessons, sports, and music as we try to fill their days with enriching opportunities, right?  And it won’t stop just because school is starting.  Many families continue all these commitments year round.
But what if the kids hate it, or it just isn’t a good fit? We don’t want them to have a quitter mentality, so when is it okay to let kids resign? After raising four kids, here’s my list of when it’s perfectly okay to say stop:
1.       When the piano teacher says, “Honey, wouldn’t you like to try tap?” (Yes, this happened to me, and yes, I have used it in one of my novels.) 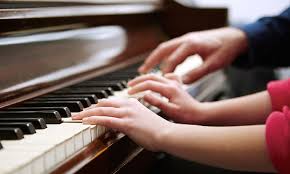 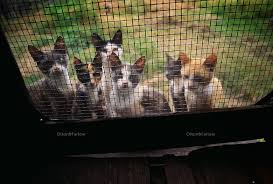 6.      When the coach is the most immature person at the pool and throws a chair in anger. (High school water polo.)
7.       When her pet breeding hobby yields 28 extra guinea pigs. (Yep, happened right upstairs.)

8.      When his science experiments involves gun powder or gasoline. (Two kitchens still bear the scars.)
9.      When the coach assigns him to do everyone else’s laundry.
10.     When you’re still trying to get him to break the 20-minute mile.


Let’s face it, not every activity fits every kid.  But books do, and I’ve written something for everyone.  Check ‘em out here.
Posted by Joni Hilton at 7:00 AM No comments:

Have you ever felt, really and truly, well, stupid?  Hopefully such moments are infrequent, and are interspersed with wonderful moments of feeling wise and brilliant, or at least able to fake it.  But I think we all have those creepy times when we say or do the absolute wrong thing, and there’s no back-pedaling. 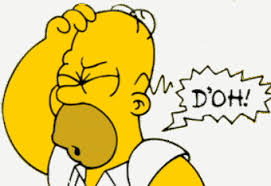 I have many of these, but my stupidity stops short of sharing all of them in one blog post.  Since most kids are going back to school now, I’ll tell you just one of mine.  It happened during my first semester in college.  I had signed up for a psychology class (okay, I figured I would ace it since my dad was a psychologist).  One of the requirements for freshman peons is that they volunteer to help senior psych majors with lab experiments.  I signed right up for a two-hour meeting with an uptight coed I shall call Merda.  I have chosen this pseudonym because by the end of the experiment, I’m pretty sure she wouldn’t have minded murdering me. 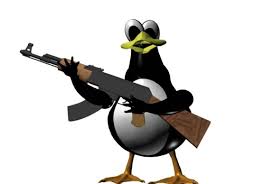 She sat me down and began explaining the binary system to me.  This was before everybody had their own home computer, and decades before we all had them built into our cell phones.  Also, mind you, math is not my strong suit.  Math with alphabet letters standing in for the numbers is such a pet peeve of mine that my brain digs in its heels and resists what is clearly Language Larceny.  But Merda was on a roll.  She explained the entire binary language, then asked me a series of questions about it, to see if I had understood her.  I failed miserably and with every wrong answer she became more and more irritated.  It was as if I were proving her teaching methods wrong. 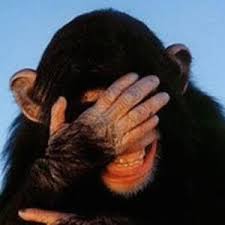 Just as an aside, I would like to add that this aversion to such matters is not genetic, apparently.  I gave our eldest son a binary clock when he was in high school and he was THRILLED.  Nobody else could read it, so he was now DOUBLY THRILLED.  Or BINARILY THRILLED. 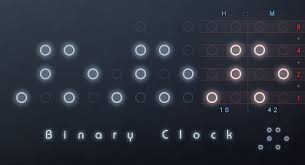 But back to Merda. By the end of our session, she had progressed from irritated to incensed to fully angry. She accused me of not trying (I get that a lot, but it’s usually in sports), and of not taking school seriously. Little did she know that I was very likely the most serious taker of school she would ever meet.  Finally she said something about my not being adept, period, and for some INSANE reason I thought about horses.  I thought about how much I loved to ride, how I first learned on skittish Shetland Ponies, and how I knew how to saddle one up and take off, something most kids at my college in Los Angeles would find utterly miraculous. 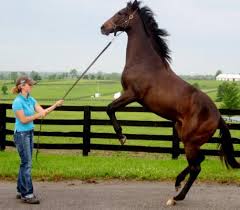 As she dismissed me, I decided to defend myself by pointing out that not every praiseworthy skill relates to the binary system, and I said, “Do you know how to housebreak a horse?”
She stared at me, incredulous.  “No,” she said.
“Well I do,” I snapped, and with that final “touche” moment, swept out of the room in moral victory.  I got about twenty feet away before I realized I had said, “housebreak,” not just “break.” So now, not only did Merda think I was the dolt of the century, but a squalor-dwelling nitwit who keeps horses INSIDE her house.  Potty trained or not, this is truly not a good idea. 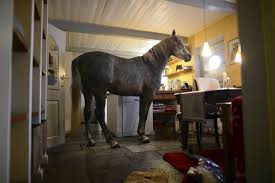 Yes, folks, you cannot make this stuff up.  And now, if you’ll pardon me, I’m going to look at pictures of horses on Facebook.  What the hay.
I’ve blogged about other embarrassing moments; scroll through and you’ll see many.  Be sure to subscribe, so you can feel brilliant every single week.
Posted by Joni Hilton at 7:00 AM No comments:

Is There Really a Lid for Every Pot?

There is a strange phenomenon going on in every household across America, maybe throughout the world. And none of us question it, we just live with it.
It’s the Mystery of the Tupperware Lids. That may not sound like the next riveting Stephen King novel, but believe me: It’s taking over the universe. 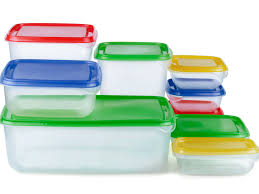 We all have a stash of these plastic containers.  And maybe they’re made by Rubbermaid or Ziploc or some other company, but the problem remains: Our lids and bottoms do not match up.  At least not perfectly.  We either have too many lids or too many bottoms, many of which have no mate.
How is this possible?  We buy them in matching sets, the math is perfect.  And then, within days, our world is in disarray. 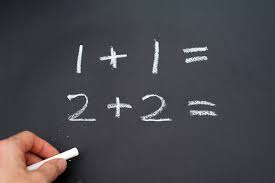 Imagine if this happened with your shoes.  Suddenly no two shoes go together—you have a Nike shoe, a dress shoe, and a slipper.  But no mates.  You’d call the police, right? And report shoe theft or something. 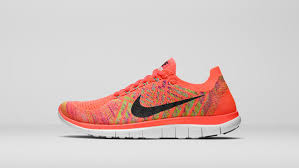 What if one of your bedsheets was suddenly gone?  Or half your shirts?  Sure, we all joke about the lost sock in the laundry, but that’s one sock. Not one of every pair.
Does plastic decompose faster than we’ve all been taught, and does it literally evaporate into the air? Is there a vast network of tiny elves who worship plastic, and who sneak into our homes (through the vents?) and then make off with various lids? Did someone melt them in the dishwasher, or try to bake them in the oven? 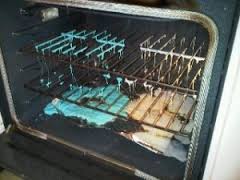 It makes you want to install a tiny chain from the lid to its bottom, the way banks protect their ball point pens.  Or just use ceramic bowls and plastic wrap forever more.  Or disposable Chinese-style take-out boxes.  Meanwhile, I don’t recommend calling the police.  They’d have time for nothing else.


Stay home and guard your plastic containers—curl up with a good book and keep one eye out for thieves.
Posted by Joni Hilton at 7:00 AM 2 comments:

We Should Have a Nancy Johnson Day

Last week I blogged about the ice cream man, and since we’re still in a heat wave today I’m blogging about the ultimate Ice Cream Woman, Nancy Johnson.
No one knows exactly what she looked like, so I’m going with Marlene Dietrich.  Hey, who’s to say she didn’t look like this? 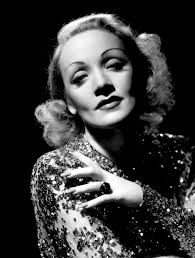 What we do know is that she was a Philadelphia housewife, born in 1795, and that she invented the hand-cranked ice cream churn and that, in turn, made history. 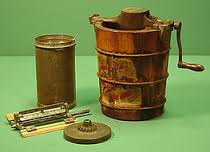 Before this ingenious invention, ice cream was made laboriously at home, with lumpy results. And usually only by servants of the ruling class.  But now, thanks to Nancy, quality ice cream could be produced and sold to the masses.  Even today, electric mixers resemble the one she invented, using cylinders, a paddle, a lid, and a crank. 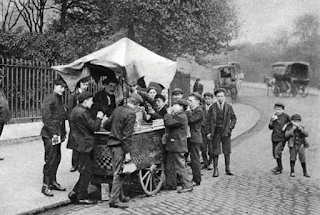 Flash frozen—I mean flash forward—to today, and we find out that Americans each eat more than 22 pounds of it a year. The most popular flavors, in order, are: Chocolate, Vanilla, Cookie Dough/Cookies & Cream, Butter Pecan/Swiss Almond, Mint Chocolate Chip, and Strawberry. 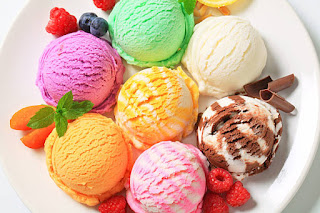 Just in the U.S., sales average about $14 billion a year, and $77 billion worldwide. 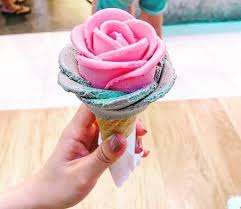 Unfortunately Nancy couldn’t afford to manufacture her own invention, and sold it for just $200.
I think the very least we can do is give Nancy her own day.
And nothing beats reading a good book while enjoying an ice cream cone.  You can order my books here.  The cone you’ll have to scoop yourself.
Posted by Joni Hilton at 7:00 AM No comments:

When I say “Ice Cream Man” you picture the guys driving the musical trucks around, right?  And little kids running out of their homes to catch him and buy some ice cream? 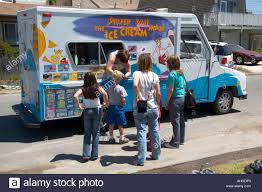 Well, I picture that as well, but I also think how cool it would be to have a giant mannequin made entirely of ice cream.  Surely there’s a festival somewhere, where they do this.
In Los Angeles this summer, there was a pop-up Ice Cream Museum (tickets sold faster than hotcakes topped with ice cream), and one of my friends described her visit as a religious experience. 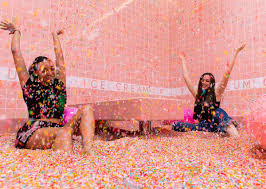 But back to the ice cream man.  It occurs to me that these brave, hardy souls who traverse suburbia selling popsicles and ice cream sandwiches are to be admired for something else as well: They can tolerate the same tune, played loudly on tinny speakers, for hours upon hours as they make their rounds. In my neighborhood it’s “The Entertainer,” which was actually written by Scott Joplin in 1902.  If people in Rocklin ever attend a Ragtime Revue, every one of their mouths will water when that tune begins.  We’ve been trained like Pavlov’s dog. 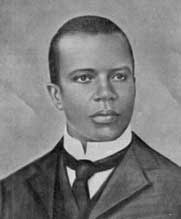 And every time the ice cream man goes by, I think of him with admiration for being able to tolerate repetition, the likes of which would drive anyone else into a screaming fit.  So today I pay tribute not only to the guy who brings cool, refreshing treats to the sweaty masses in this heat wave we’re having, but to the guy who can maintain his sanity when all others would be losing theirs. 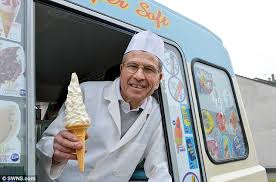 Stay inside where it’s cool and enjoy a frosty treat while you read one of my books.  I don’t even mind if you drip ice cream on the pages.
Posted by Joni Hilton at 7:00 AM No comments: