Yes, there is only one prank I pulled in childhood.  At least one that I choose to share.  And this one I pulled with my friend, Nan Slaughter, when we were both about 13 years old.  In those days, had there been personal computers and Pinterest, this idea would have been on there.  But it wasn’t.  We’d simply heard of a grand, craftsy project, which was to dye your old clothes—and even your underwear—to give them new life.  You could have a whole new wardrobe for just pennies!   The key ingredient was RIT dye.  You know the familiar little boxes, still a bargain in every grocery store.  We chose navy blue.  Then we gathered T-shirts, camisoles, slips, you-name-it, filled a sink with hot water and RIT, then squished the clothes down into the murky liquid and waited. 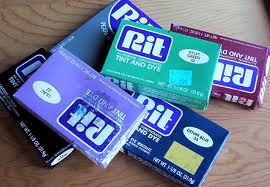 Nan, to her credit, was the brave one.  She reached into the abyss, pulled out the garments, and wrung them out, rinsing them again and again with cool water.  And they were a dazzling success.  There was only one problem: Nan’s hands were now bluish gray and it wouldn’t wash off.  (We should have timed this for Halloween and she could have been a corpse in a spook alley!)  Alas, nothing would budge the tint of her newly-dead-looking hands.
And so the wheels began turning.  We decided to wrap her wrists with bandages, hop on the city bus, and ride around town telling onlookers about a terrible accident she’d had, to see who would believe us.  I borrowed white hankies from my dad’s dresser drawer, and we pinned them carefully to look like real bandages. Then off we went to keep straight faces as she told all inquirers (and there were many) our sad tale.  She concocted a wonderful story about helping her brother lift a heavy stereo up some stairs (yes, stereos were heavy in those days), when suddenly it fell, crushing her hands and causing the veins to burst, filling her poor hands with blood.  Then we would both look especially sad, not really sure if she would ever recover.
Luckily our victims got off at various bus stops and new recruits boarded, giving us the chance to re-tell and embellish the story every few blocks.  I seem to recall saying that Nan was a hemophiliac and needed a transplant at one point.  Oh, the sympathy!  Oh, the shock!  People were genuinely sorry for us.  Well, sorry for her, but I chose to bask in that pity a bit myself.  Finally one woman offered us a dollar!  And suddenly we realized we were great actresses surely destined to win Oscars one day.   We also realized that maybe this thing had gone too far.  About one dollar too far.  Lying our heads off was one thing, but accepting money under false pretenses was just over the line of decency as we defined it.  So we headed for home.
But our creative talents kept flowing, and though we didn’t hoodwink the public again—at least not intentionally—we went on to become other things. I became a writer who, uh, accepts money for making things up (hmm…) and Nan became an amazing quilter/cook/author/artist/wedding floral designer herself.  We’ve now been friends for more years than I admit to being alive.  She's been there for me in countless ways over the years, and last August traveled from Seattle to Sacramento to help me enormously with the wedding reception for my son.  Her blog, www.potsandpins.com, has 5,200 followers and when you check it out, for you must, don’t think about my airing of this laundry, okay?  Or at least, if you do, picture it navy blue.
Here we are in a photo booth at the mall, about a year later and still-- thankfully-- not in jail: 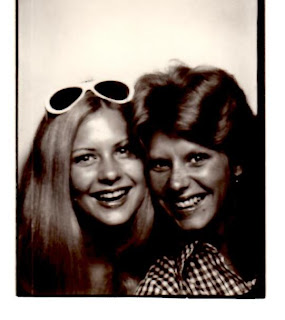 C'mon, now, you know you're dye-ing to subscribe.  Just type your email address into the little box on the right.  I can't promise to send you my uber cool white aviator sunglasses (retro is hot, now), but I will send you brilliant comedy  several times a week, and won't even charge you a dollar.