I heard a high-pitched, fluttering sound, almost a whine.  I opened my eyes, listened to be sure I wasn’t dreaming, and then did what any good wife does.  I woke Bob up.
“Do you hear that?  What is that?”
Bob groggily came back from a deep sleep, listened, and then got up to investigate.  This is yet another reason why I refer to him as St. Bob, because he tolerates a wife who does not get up to investigate herself, but who tugs on his arm and sends him out to meet any number of armed robbers who might have come in through the doggie door.
“It’s Brandon’s shark,” he calls from the hallway.  “It was up by the air conditioning vent.”  Apparently a fin got sucked up into the vent and was rattling, so Bob pushed the shark back into the guest room where it has been from Christmas until now.
This would probably be a good time to explain.  For Christmas we gave our second eldest son, Brandon (grown and living in San Diego but always home for Christmas with his Great Dane in tow) an inflatable shark.  Filled with helium, these life-sized balloons float through your home, office, or the subway station they show in the video, powered by a little motor on their belly, not unlike the Goodyear Blimp. 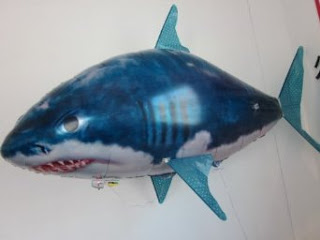 They arrive in a box, you take them to your local party supply store for a gigantic injection of helium, and then dash home as other drivers stare into your car in disbelief.  Once home, you carefully attach the motor and then these babies fly through the house waving their tails and fins.  Add one Great Dane and a Chihuahua, and you have the recipe for Christmas hilarity, if you ask me.
Except the motor didn’t work.  Naturally it took the better part of our holiday for Bob and our grown sons to tinker with it, switch out the batteries, blah-blah-blah whatever men do, and still we got nuttin’.  The company wouldn’t send free replacement parts, but they were more than happy to sell me some.  I decided to fork over more cash, resist the impulse to accuse them of the numerous reasons why anybody else would see them in court over this, and decided to wait for the new motor.  Meanwhile, we left the enormous man-eater in the guest room, which seemed the decent—or at least the most amusing—thing to do.
Eventually the new motor arrived.  Sadly we deflated the poor creature, stuffed him into a box and mailed him to San Diego.  I doubt you could do this with a real shark, so as they say, “Don’t try this at home.”
Then we called Brandon.  This was during the very same week when his little sister, Nicole, had departed for a church mission to Norway.  Brandon said, “So I’m not so much losing a sister as gaining a shark.” Yep, that’s the cheery perspective I have always tried to teach my children.
And I’ll simply have to wait until next Christmas to scare the daylights out of our dogs.

Subscribe before a shark nudges you in the night!  Look for the box on the right where you can type in your email address.  And be sure to swim around my blog for info on my radio show and my latest novels.
AND... my East Coast readers, don't miss my new play, GIFTED, coming to Times Square in New York City. It will premiere at The American Globe Theatre later this month. The best way to order tickets is to go to www.brownpapertickets.com- and on the home page, punch in either Fifteen (not 15) Minute Play Festival or American Globe Theatre (re not er), hit enter or the icon that looks like a magnifying glass and it will take you right to the link. Tickets are $18 plus a minimal service fee.  This festival sells out fast.

Email ThisBlogThis!Share to TwitterShare to FacebookShare to Pinterest
Labels: shark