What's in a Name?

I haven’t always liked my name.  For one thing, it isn’t really Joni; it’s Joan.  As in Joan Fontaine born in 1917, Joan Crawford born in 1904, and Joan of Arc born in 1412.  My parents were in their 40s when I came along, so I have an older generation’s name.  Needless to say I did not have many other Joans in my classrooms growing up.


Also, to my ear, Joan sounds stuffy and serious.  If you’ve been reading this blog you know that Joni fits a whole lot better.  So in grade school I informally changed it and have liked it ever since.  But there aren’t too many Joni’s around, either, and I was recently very unamused by a conversation I had with Bob, wherein I complained about this very observation.  After all, his name is everywhere—there are bobby pins, bobolinks, haircuts called bobs, and kebabs which are pronounced ka-bobs.
Me: How come there are kebabs but no Ke-Joni’s?
Bob: Actually there are Ka-Joni’s, but they’re Spanish and they’re called Cajones.
And now he’s grinning like a chimpanzee and I am frowning and we look like the comedy-tragedy drama masks.  I do not want my name to feature in Spanish slang for a part of the male anatomy.
And then THAT SAME AFTERNOON I get an email of trivia that includes the happy little factoid that of all the minerals and goodies in the periodic table of elements, not one of them has the letter J in it.  There is no Jonium, even though it virtually flows from the tongue and cries to be included.  If any kindhearted scientists are reading this, I would like it to be something sparkly, not necessarily a gas. 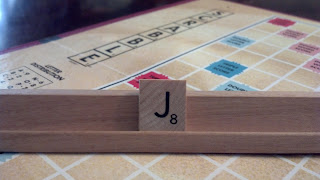 And then I recall a scene I have repressed from my memory, but which comes flooding back, now.  It’s a Latina friend of mine helping her young daughter into her underwear and saying, “Pull up your Joni’s.”  Excuse me?  Now my name is Spanish for underwear?
So I am working up a good pout over this rejection of my name and my letter (it’s also the letter you don’t want if you’re playing Scrabble), and Bob is texting someone and chuckling.  He has that swipe feature where you brush your hand over the keyboard and occasionally—no; frequently— it incorrectly guesses which word you want.
“Hey,” he says, “When I swipe your name on my keyboard, guess what comes up?”
I feel my eyes narrowing because I know it’s not going to be “genius” or “joyous” and I am right.  It’s Hobbit. I do not ask if this Hobbit has cajones.  I do not want to know.
Don't miss a single blog!  After all, how can you live without these essential observations?  Please subscribe in the box at the right, and they'll pop into your inbox on a regular basis, you lucky duck.
Posted by Joni Hilton at 12:13 PM