I ask you:  Isn’t it enough that my eldest son, Richie, exploded purple chemicals onto my kitchen ceiling when he was nine, nearly blew his hand off in high school, makes his own black powder fire crackers and tried to install a jet engine in a Mustang?  Now he wants my big screen TV so he can make a Death Ray.  Yes, you heard me: A DEATH RAY.  Did I mention this child is now 31 years old?
Last night he calls and asks if he can have our TV, should it ever conk out and require more money to fix than it’s worth.  Sure, I say, the ever agreeable, kind, generous mother.  Once again, I walk right into it.
Good, he says, because he’s going to make a death ray and see if it generates enough energy to power his home.
Some troublemaker with a Ph.D in physics (his poor mother) has posted a youtube video of this ridiculous idea, where you extract a gigantic magnifying glass from the TV screen, angle it so the sun hits it just so, and then whammo!  You annihilate anything in its 2,000-degree path.  Wood ignites instantly, pennies melt like bits of wax, eggs fry, and hot dogs turn into charcoal briquettes.  You think I’m kidding?  Watch the video.
Clearly this gizmo would pose risk to life and limb for anyone daring enough to reach into its path at the wrong moment.  And, should it accidentally ignite a dry patch of lawn, I can see whole neighborhoods going up in flames.  Naturally the brainiac in the video puts it in a WOODEN frame.


I tell Richie I never should have taken him to that science supply store where they have a cat named Rhymes-With-Orange.  And his also grown brother, Brandon, would be right in league with this if he weren’t living in San Diego, a relatively safe distance from Sacramento.  Brandon once created a mushroom cloud in our street, made all the windows rattle, and scared a Lebanese airport shuttle driver out of his wits. 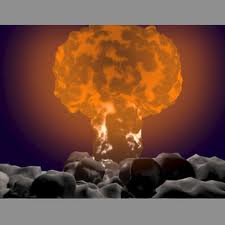 These two geniuses are the reason I wrote the play, “GIFTED,” which is being performed next month at the American Globe Theatre in Manhattan.  The synopsis is, “Dan and Julie discover that having gifted children isn’t much of a gift.”  These are the kinds of kids who become notorious criminals like the Unabomber.  Or computer hackers.  Or lawyers.  These are kids who disassemble their cribs as babies, and remove all the childproof locks from the cabinets.  Later they ask for things like thermite powder and pyrodex for Christmas.  Which they do not get.


In the fifth grade, they pull you into their bedrooms to show you an arc and some numbers on their white board, and offer this as an explanation as to why they shouldn’t have to clean their room anymore.    Then they graduate from high school early, but come back for auto shop just to work on their Mustang, and cause their high school to rewrite the school’s rule book about tardies.  These are kids whose teachers write an unsolvable equation on the board, and then get mad when the kids solve it.  I could go on all day with this.
Did I mention giving their mothers gray hair?  And then saying, “Too late” when you tell them you’re going to die an early death?
And now Richie wants to create something Lex Luthor would use to vanquish Superman.  It’s solar-powered, he says, environmentally safe.  Yes, unless your environment is the target of the death ray.   To say, “You can have my TV over my dead body” would be playing right into his hands, wouldn’t it?
He says he also wants to melt basalt rocks with it to separate the minerals, research the earth’s mantle, blah, blah, blah, something scientific, which I question in the first place as something that needs to be done at all.  But it could probably be done in a laboratory while wearing goggles and gloves, and does not need to be done in one’s back yard where it isn’t even legal to build a fire for s’mores, much less a death ray.
The only thing I will admit is that, at least, it’s aptly named.  And that only a very tiny, small part of me wishes I’d thought of it first.
http://www.dailymail.co.uk/sciencetech/article-2291661/Videos-turn-old-television-solar-powered-death-ray-burn-path-2-000F.html