You know how you get emails from time to time, telling you the signs of a stroke?  Well, what does it mean if you’ve had those symptoms for 20 years?
About 10 years ago my friend’s mom had a mild stroke and, though apparently fully recovered, complained that she couldn’t always think of the word she wanted.  Helloo?  I’ve been doing that for years!  Isn’t that why the Thesaurus was invented? And why we all say thingamajig? ALSO… two days ago a dear friend of ours went to the hospital for those TIA mini-strokes, and guess why?  Because she couldn’t think of her friend’s last name!
“Are you kidding me?” I said to Bob.  “I get Kristin Jeppson’s name wrong half the time.  I mean Kristin Sterri’s.”  Now we both busted up laughing.
Exactly how confused do you have to be to call an ambulance? I was talking to my nail lady—yes, I have a nail lady—and she was sharing with me how utterly mortified she was when she recently tried to get into the wrong car in a parking lot.  I just stared at her.  I do that two or three times a week.  I drive a little burgundy Altima and every time I park it there are two or three similar-looking cars right by it when I come back out.  Like similar species of birds, all clustered together on a wire.  And I’m supposed to tell them apart?
I have two friends who have excuses for this sort of thing.  One had an aneurism and one had a severe head injury in a car accident.  But I am keeping right up with them and have NO EXCUSE.
When we lived in Iowa we bought a gigantic 100-year-old house with 100-year-old plumbing.  This meant that if someone wanted to shower, they first told everyone not to run water or flush a toilet because it would plunge them into an icy torrent.  Bob would make just such an announcement and I would vow to remember it for the length of a shower.  But in truth I would only remember for two or three minutes and then begin rinsing vegetables or watering plants.  Finally I was determined not to let him down yet again, so I decided to stay out of the kitchen entirely.  No faucets for me, no sir!  I went downstairs to the laundry room and started a load of laundry.  Now that should occupy me for a good, long, while.  And I couldn’t understand why I soon heard screaming.
Tell me if this would cause you great alarm:  We have a rollover telephone line, which means that if you’re using one line and a call comes through, it rolls over to the other line.  So one day I decide to call my backdoor neighbor, Kathy Ray.  Not only is her address similar to mine, but so is her phone number.  So I dial.  And my other line starts to ring.  Shoot!  So I have to hang up, hope she didn’t even hear one ring, and answer the incoming call.  Only nobody is there!  Whatever.  A wrong number, probably.  So now I try again and dial Kathy.  But darned if the other line doesn’t start ringing again!  And when I hang up and answer that one, once more no one is there.  Who keeps calling me and hanging up?  How irritating!  And only now do I realize I have been dialing my own phone number.  That’s right.  Calling myself.
Maybe I should keep the hospital on speed-dial. 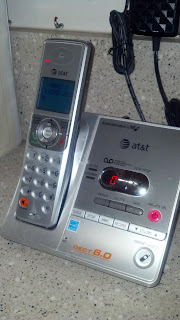 Email ThisBlogThis!Share to TwitterShare to FacebookShare to Pinterest
Labels: Life with Joni