How Do You Mean That?

I don’t want this to be a blog about misspelled signs or poor wording, but I just got an annual policyholder brochure from New York Life, and it BEGS to be shared.  Now here’s a bazillion-dollar company, right? And they paid a design team a half a bazillion dollars to design this thing (I'm willing to rewrite it for half that; I'm just saying).

The first five pages are allegedly written by Ted Mathas, the Chairman of the Board, President and CEO.  He’s the head mucky muck, you might say.  Only this time he has mucked it up royally, because check out the cover he sent: 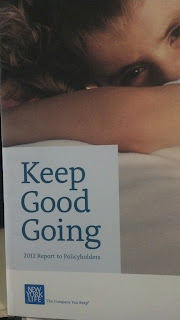 What, exactly, does this mean?  Here’s where he tries to explain it: 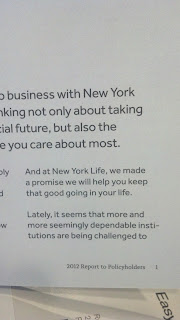 In case you can’t read it, he says, “And at New York Life, we made a promise we will help you keep that good going in your life.”
Do they want you to keep goodness going?  Then why leave out the “ness”?  Maybe he means, Keep doing good deeds, pay it forward, keep those good gestures going.  You know, help others to follow your kind example, the ripple effect.  But I don’t think that’s what an insurance company usually promotes.
Do they want to say “Good Stuff” but realized that “Keep Good Stuff Going” sounds stupid?  How about “Keep Good Things Happening?”  Was that too many letters for their slogan?  What are they—a TV network that chooses yearly slogans like “We Know Drama” or “Characters Welcome” and it has to be short enough for imbeciles to remember?
Maybe they’re trying to say, “Keep the good work going, such as buying insurance policies from us.”  Maybe it’s a slap on the back, with a hearty “Good going—keep that up!”  Maybe they should have appealed to all the Australians out there, and simply said, “Good on ya!”
These are all reasonable possibilities, but which one do we choose when we see the three words, KEEP GOOD GOING?  Would a dyslexic person see this as KEEP GOING GOOD in which case it should say KEEP GOING WELL?  How about WELL, KEEP GOING?
Further into his letter, he says, “… we are here for good…” and now I’m thinking, aha—he means permanence.  Keep permanence going?  Isn’t that already implied in the word permanence itself?  Keep permanence permanent?
Finally, at the end of his nearly endless letter, he uses the phrase that should have been on the cover in the first place:  “The Company You Keep.”  Now that says it all— first the clever turn of phrase about how we’re all known by the company we keep (and hopefully we choose quality associates), but it also conveys permanence and excellence—here’s a company so good you want to keep it.
Now that would be good going.  At least, sort of.
(At first, when considering this topic, I thought New York Life might send a hit man.  But then I’d be dead and they’d have to pay up, so I think I’m relatively safe.)
Posted by Joni Hilton at 2:40 PM