We have a winner!  The contest I ran, to name a character in my next book after someone who reviewed one of my 3 new novels (on Kindle and in paperback at Createspace.com) has ended. I drew the name of Valerie Steimle, who posted this 5-star review on Goodreads:
This book was such a great read!!!! The story has such drive you want to finish it in a day!!!

With the background in biology and anthropology, Joni Hilton has down a great job in writing such a believable story.

Clean and appropriate for teens to read.

Thanks, Valerie! I don't know who you are, but I very much appreciate your wonderful review!  For those who haven't seen this one yet, it's about Nina, a girl who goes with her famous uncle on an anthropology expedition to an uncharted island in the Indian Ocean. It's filled with dangerous creatures, cannibals, and natives who wear glistening white crowns that unwrap into deadly whips. Storms, fire, murder, and greed for gold all shake the expedition, and only five of the seven members will return.  The customs and language here are unlike any other.  It’s a history-making opportunity for the the scientists, and for the girl who hopes to follow in her uncle's footsteps.

But when she's rescued from a wild animal attack by a golden-haired native with brilliant green eyes, the entire plan changes.  Could he really be the infant son of an English scientist who died here 20 years ago?  What does it mean when she alone is allowed into the cemetery, then into the women’s hut?  And why did she wake up covered with orchids?  Will Nina forget about this jungle man and his dangerous island, and go back to her studies, or give it all up for love? 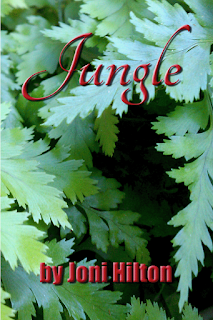 Email ThisBlogThis!Share to TwitterShare to FacebookShare to Pinterest
Labels: Life with Joni, writing