I need to go to Projects Anonymous.  I keep taking on impossible projects I am certain will be easier than they actually are.  Especially when it comes to sprucing up the house, inside or out.
The other day I decided to paint our grandfather clock.  Now, before you gasp in horror, or say, “Won’t that diminish its value?” as one of our sons did, let me just assure you that this was not a priceless antique, nor a valuable heirloom.  It was a blah, brown clock.  Here you see it next to our piano: 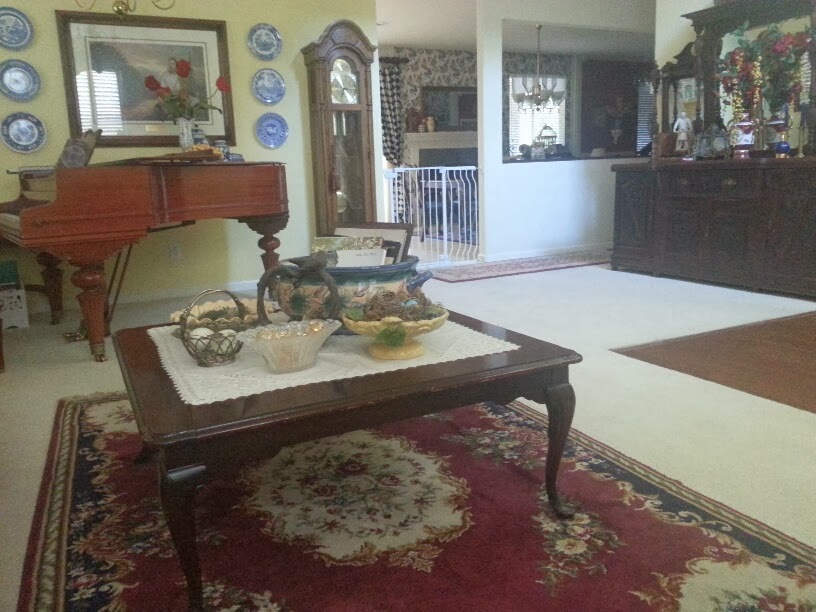 First I washed it down with TSP, something a guy at the hardware store told me would remove the shiny finish.  Nope.  Then I bathed it in a chemical stripping agent.  Hardware guy was wrong again.  I sanded it with steel wool.  Still nothing.  Finally I gave up and just covered it with primer.
I had not calculated how many nooks and crannies were in this piece of furniture, so after a few hours I came whining to St. Bob that I think I made a mistake and was sorry I started this.
“You always say that, with every project,” he said.
“I do?”  I went back to work and began painting until my muscles were sore.  I was still a very long way from done, so again I went to Bob and said, “I feel like crying.”
“You always say you feel like crying, with every project,” he said.
Sigh.  Maybe this is true.  Soon I considered telling him that I’ve learned my lesson and I’m not going to take on any more gargantuan tasks.  But just as I headed toward him I realized he would probably tell me that I also say this every time, so I stopped.  And went back to work.
Here’s the problem.  Okay, one of the problems.  I love MacKenzie Childs stuff.  Years ago a girlfriend gave me one of their domed cake plates: 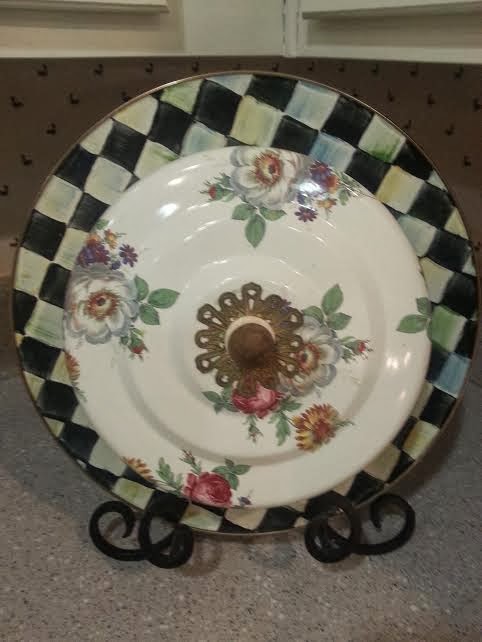 They also make furniture and rugs: 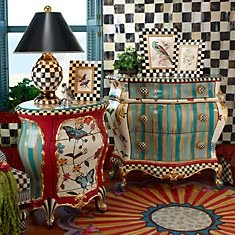 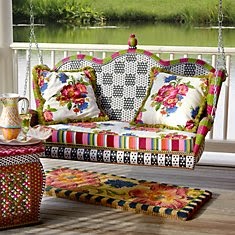 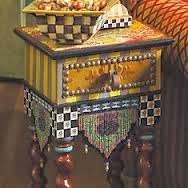 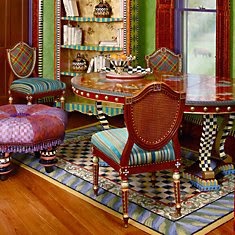 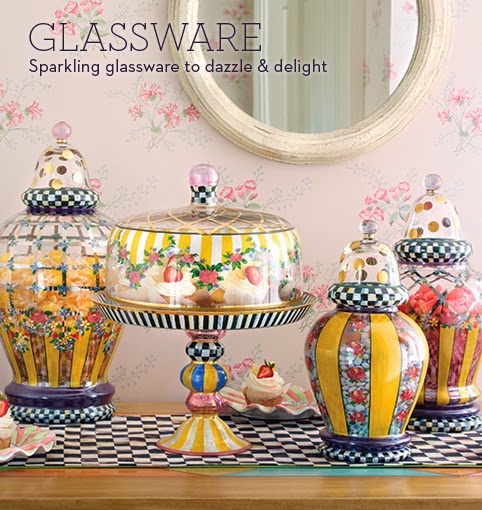 And ceramics and enamel goodies: 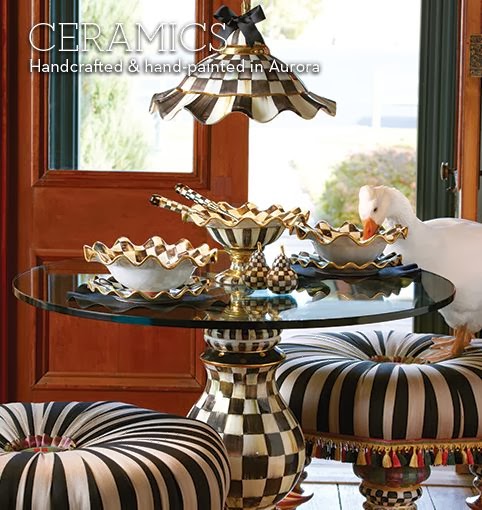 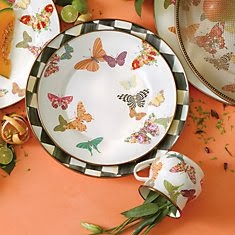 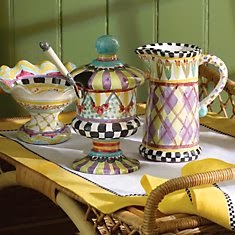 All of it is whimsical, merry, and makes my heart sing.  It does not, however, make my wallet sing.  So I’ve tried to duplicate the look myself.  I decorated my entire kitchen around that concept, and even made a kitchen island from an old dresser, to go with the theme: 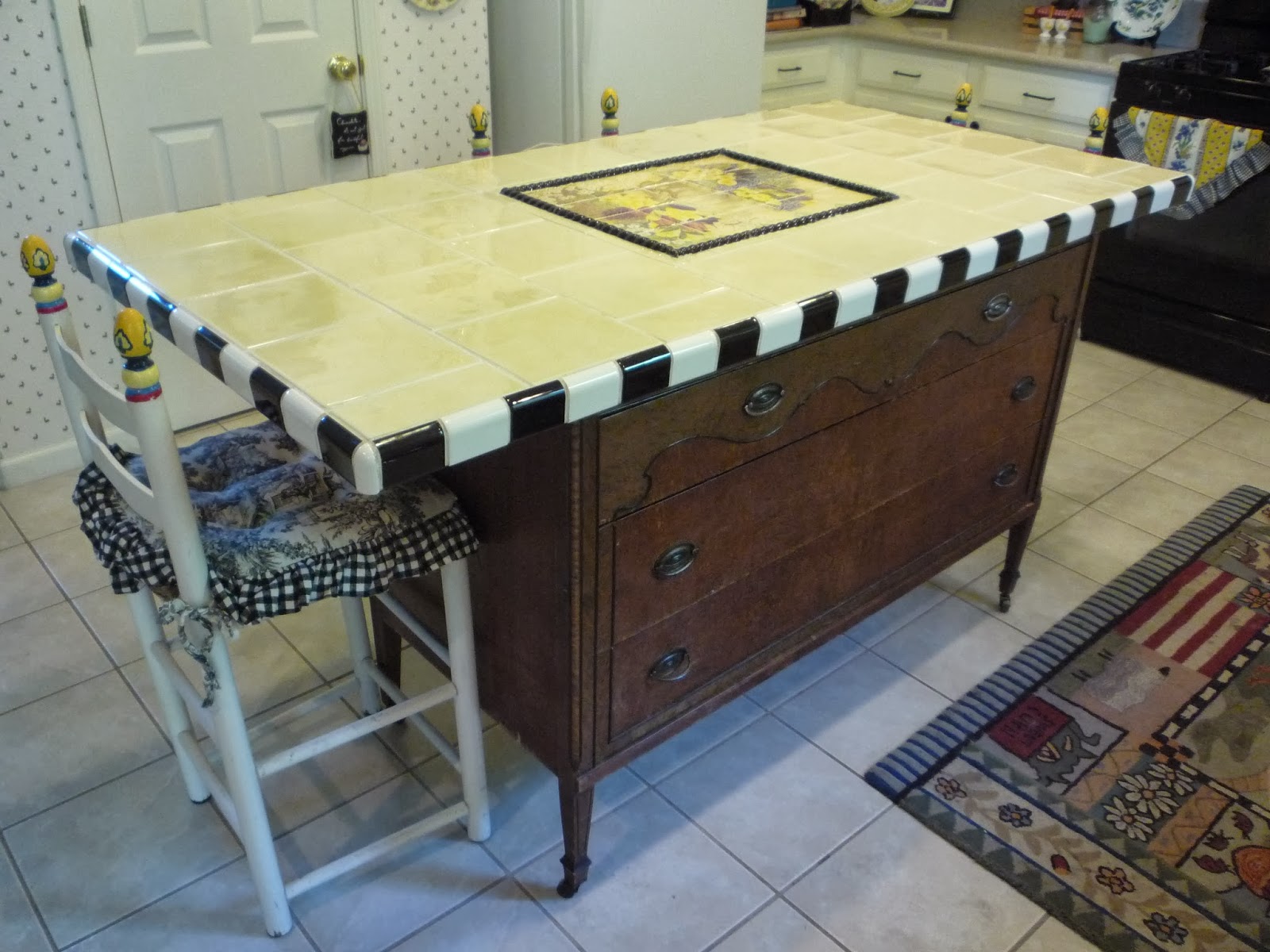 Then I painted a table in our family room in that style: 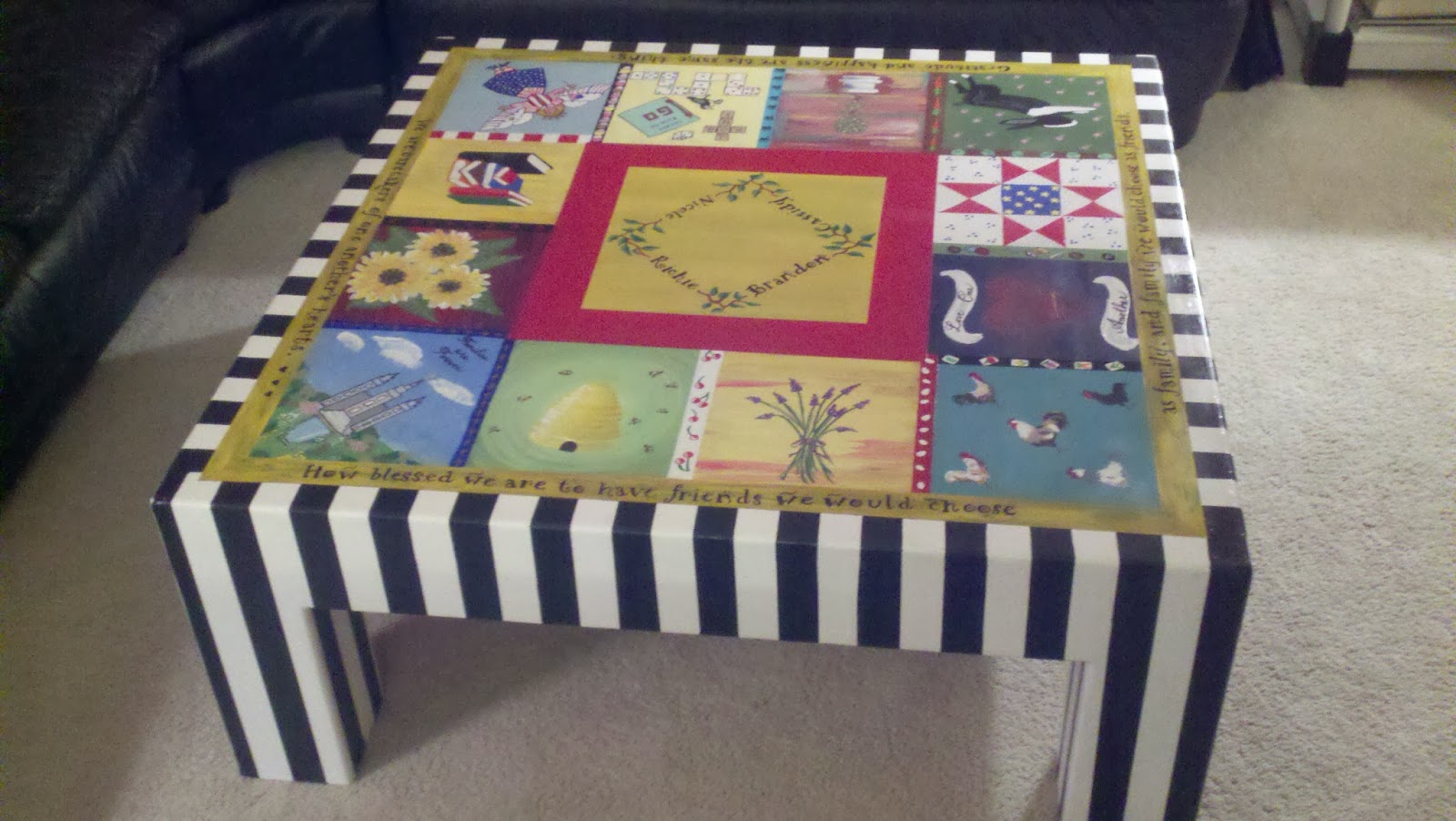 I even gave the end of one hallway a jazzy nod to MacKenzie Childs: 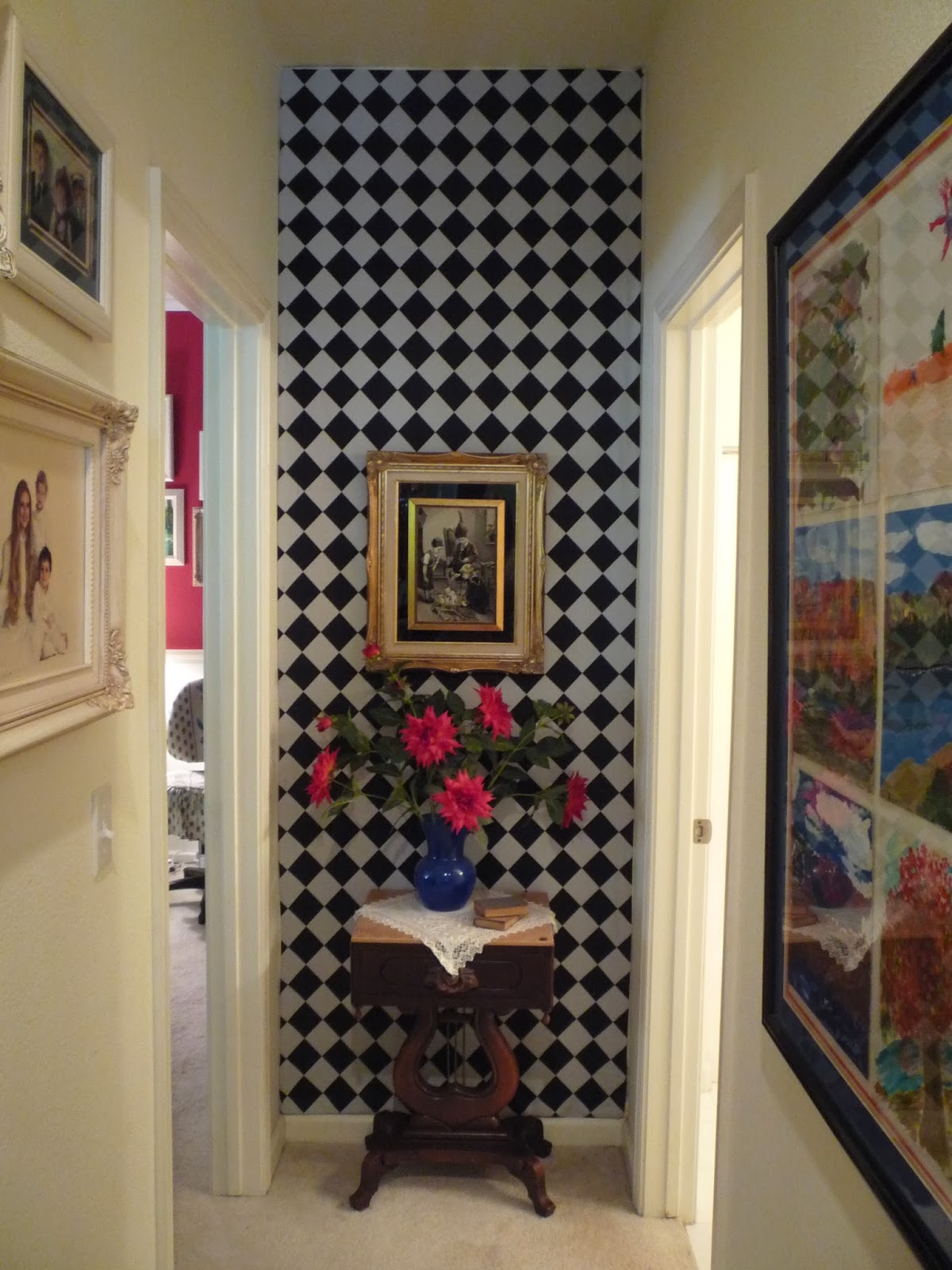 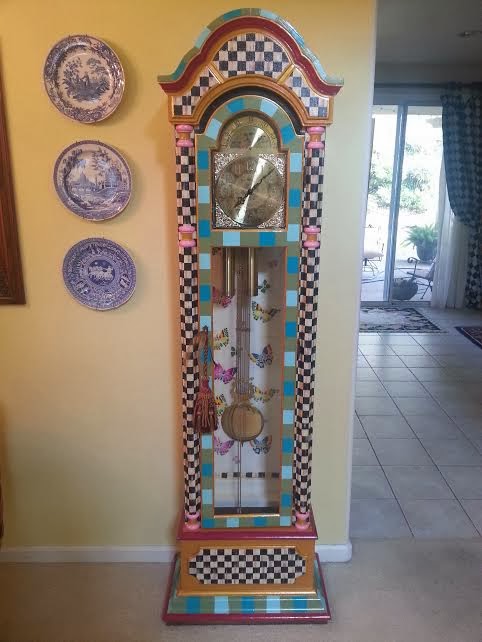 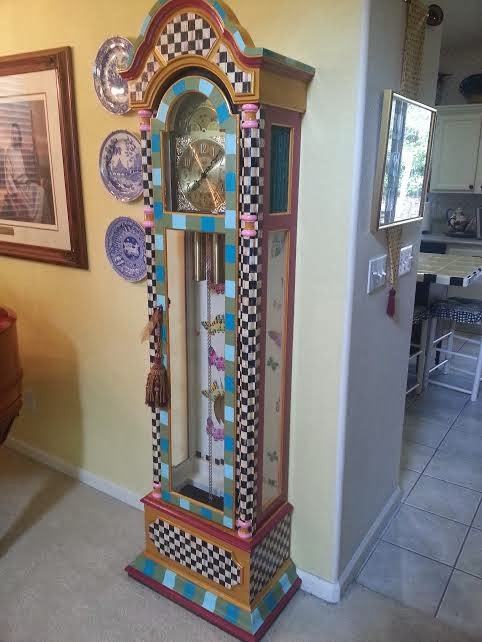 It’s wild, it’s daring, and it lifts my spirits every time I walk through the door.  “I love it,” Bob says.  “I knew you could do it.”  And moments like these are why he gets the Saint status.
Share this on Pinterest, and tell your friends to subscribe—where else can you find a person who lives so far outside the box that she paints the outside of it in wild colors?
Posted by Joni Hilton at 7:00 AM