Some time ago I wrote a blog explaining that crafty women are not the same as craftsy women.  However, I am now convinced that they comprise the same group.
Women for whom crafts come easily are like computer tech experts—they think they can babble along in their own language and others will understand them.  They talk you into making their latest clever creation, and only after it’s too late to turn back, do you realize their trickery.
Case in point.  Last week was our monthly church activity night for all the women.  Dare I say we have a plethora of activities? From assembling humanitarian aid items to lectures on finance to cooking classes to spiritual instruction, it’s always something different.  Last night was a craft night.  We decided to Arm Knit and make scarves in under an hour.  This is how they look: 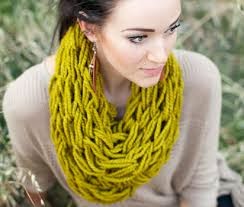 Yay, I told the activity committee.  Sounds easy and fun (see how I get sucked in?)  In fact, I suggested they go one better and teach leg knitting.  That way it could be like a River Dance performance, entertaining us at the same time.  They liked that idea, but not enough to actually do it. 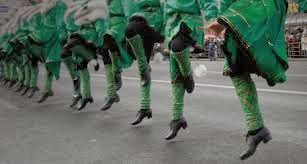 No matter.  Arm knitting sounded fun enough.  And, like everything nowadays, there are YouTube videos showing you how to cast yarn onto your arms, loop it about, and whip up darling, wooly scarves.  Now, I love YouTube, and I truly hope you have subscribed to my own YouTube channel where I post a new video every weekday, as the YouTube Mom.
But watching someone else knit is like watching a video of someone playing the violin.  You can’t just pick up and instrument and copy those sounds.  Okay, apparently some people can, because four of the women had become experts at arm knitting, and were now trying to teach the rest of us.
The first thing you notice is that this commitment means both your arms are literally tied up for an hour, so sampling the delicious assortment of crock pot soups and stews must obviously come first.  I might add that this is the kind of scarfing I like best.
Then it was time to “cast on.”  It took me half an hour to master the intricate gymnastics of this, and then I was as good as handcuffed.  Houdini could not get out of these knots of yarn. 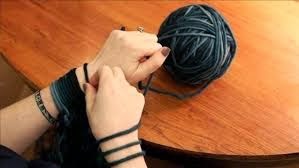 Slowly I began transferring loops on and off, five different women helping me, none of whom were quick enough to say, “I dibs not to help Joni” when the meeting began.  So they were trapped.  And I was trapped. 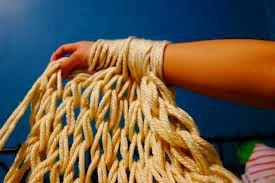 The instructors kept checking the video on somebody’s laptop, which made me glad this was not surgery and they were not my doctors.  I began making a mental list of the all the things I would rather do than make this scarf.   Get a mammogram, visit the dentist, and have a Pap smear were among my choices.
Uneven loopy clumps of yarn began to form under my arm.  Sounds like I need a better razor, doesn’t it?  Or a dermatologist.  After another hour the rows of loops piled up, and we all looked like Greek fishermen repairing their nets on the shores of Santorini. 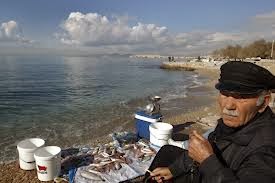 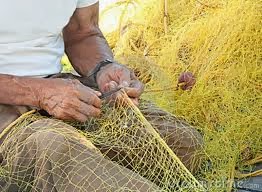 It occurred to me that we could possibly get hired as Pirates, or at least as lackeys for Pirates; we could market this net-making skill and maybe come home with some jewels or gold coins.  But I’m not sure where you apply for that. 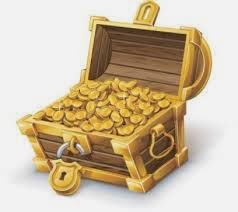 After an hour and a half my yarn had actually formed a scarf and now my friends helped me “cast off” and sew it together into an infinity scarf.  I have to admit the scarves all turned out gorgeous, and the women were excited to make more of them, as gifts. 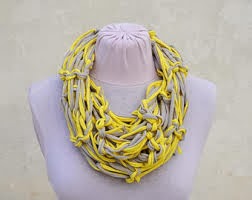 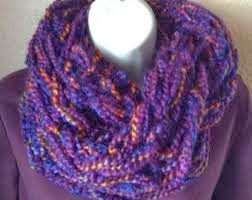 But I will only be able to do this if I have my team of tutors handy.  Turns out, when it comes to teaching me a craft, sometimes it takes a village.
If you haven't subscribed to this blog, what are you waiting for-- helpers?  Trust me, this is way easier than arm knitting a scarf.  Hey-- check out my appearance on Good Day Sacramento this morning where I showed 10 easy Valentine ideas!
Posted by Joni Hilton at 7:00 AM

Email ThisBlogThis!Share to TwitterShare to FacebookShare to Pinterest
Labels: knitting