I’m not sure the exact percentage, but I’m guessing St. Bob is responsible for at least a fourth of my blog posts.  This time it’s because he is claiming to be a Ping Pong Champion, much like the Forrest Gump character we all remember in that ping pong scene. 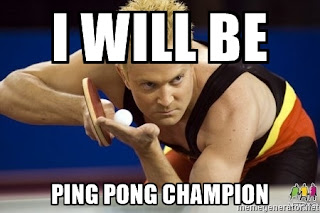 Except that Bob has no special effects crew to follow him around and arrange for him to dazzle the world.  He must rely upon his own ping pong skills.
Which brings us to out-and-out lying.  Now, yes, Bob is naturally athletic and gave the kids a run for their money years ago when we had a ping pong table.  But he has never played seriously, has never been in a tournament, never even plays videogames, and hasn’t touched a ping pong paddle in ten years. 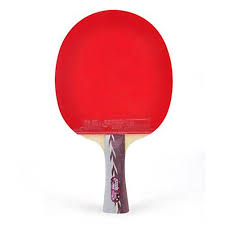 So the guys at church decided to have a ping pong event, and sent around a sign-up sheet.  They asked each man to indicate his ability by ranking himself on a scale of 1 to 10-- 1 for beginner, and 10 for expert.
Bob wrote 14.  FOURTEEN.  His plan is, when they call him in absolute astonishment, to say, “Oh, didn’t I put a hyphen in there?”
I think they should erase that little stem on the letter P, on their sign- up sheet, so it says Ding Dong Tournament.  Then 14 would be exactly right.


Yes, several of my characters are based on this man, so you simply must buy my books.  He’s also my YouTube Mom cameraman—check it all out here.
Posted by Joni Hilton at 7:00 AM