I realize that California has a new law allowing any kid into any restroom, but when I was a young girl the boys’ bathroom was The Forbidden City.  The thought of going in there was as scary as leaping into a mine shaft. 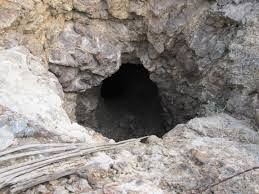 Maybe scarier, because in a mine shaft you could at least get rescued.  But in the boys’ room, you could be traumatized for life and then get into major trouble for trespassing into a taboo zone.  You might even have to visit the Principal (!) and we all know what that meant: Having it forever on your Permanent Record.  When someone said, “I dare you to go in the boys’ bathroom,” no one ever did it.  It was like saying, “I dare you to poke your own eyes out.”
Little did I know just how bizarre life really is behind that door bearing a stick figure in pants. 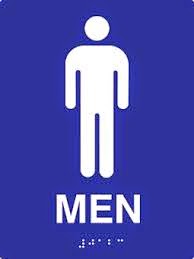 Even though I do not have clearance for it, I have recently learned TOP SECRET intricacies of this male domain, which I shall now share with you.  And I learned this from a girlfriend, whose husband told her the heretofore secret Man Information.  I did not, and will never, step foot into a Men’s Room, no matter how legal it becomes.
So here’s the low-down.  Inside a men’s room are white porcelain urinals that line the wall.  It’s not like there are 10 or 20 to choose from, often there are three. 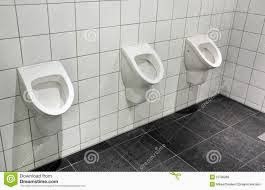 Now here’s how men think.  If a man goes in and another guy is at Urinal #1, he will go to Urinal #3, leaving the center Urinal #2 empty.   But if the other guy is at Urinal #2, he will go into a stall, rather than stand right next to the guy.
Ladies, can you believe this?  First of all, it’s odd to us that men will use urinals in the first place—so not private!—but, if you’re going to participate in this space alien custom, then why do they care which one they use?

When we women go into a restroom, we are looking for an empty stall.  Any stall.  We don’t care if it’s right next to some other woman in a stall; we’re just glad we found one that’s not occupied. Proximity to another woman is not even on our radar.  As a matter of fact, now that I think about it, we probably should choose one next to somebody else, in case ours is out of toilet paper and we need to ask our neighbor to pass some to us under the divider.  Hey, we’ve all been there.
Margaret Mead, or some other anthropologist, should have written a book about the strange culture living in a parallel universe, right next to the Ladies’ Room. And now, apparently, they are going to use whatever restroom they wish.  I just hope they put the seat up.  Sigh.


Not that you should be on the hunt for reading material in those stalls, but I do happen to have several books you can purchase on Kindle and in hard copies at Create Space.  Just in case you get tired of reading the graffiti.
Posted by Joni Hilton at 7:00 AM