Well, it was only a matter of time until St. Bob and I discovered rival ancestors.  For years Bob has known that he is a descendant of General Thomas Sumter (yes , the Fort Sumter one) while I languished in the genealogy bush with a madame as my most illustrious forebear.
Until now.  I have just learned I have Francis Marion in my line, and am graduating from a shrub to a tree.  But wouldn’t you know that these two men were bitter competitors?  I finally find a real hero in the branches and he has to be old Tom’s worst enemy.  Okay, not his very worst enemy, but a man whose “cavalier independence” rankled him, while Marion resented Tom’s “dictatorial” attitude. 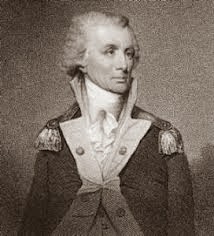 Because Fort Sumter was named for him, people think Thomas was a Civil War hero.  But he was actually a Brigadier General under George Washington, in the American Revolutionary War.  So was Francis Marion. Both of them were known for their guerilla fighting tactics, and both of them were the basis of the Benjamin Morgan character, played by Mel Gibson in the movie, The Patriot. 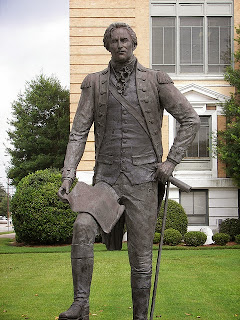 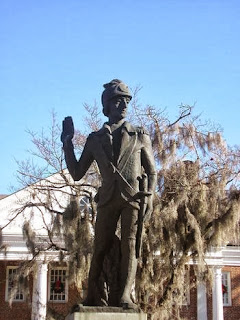 Sumter was nicknamed the "Carolina Gamecock" for his attack on British soldiers after they burned down his house, and for his fierce fighting style, regardless of his size (I had a Chihuahua like that once).   A British general commented that Sumter "fought like a gamecock,”  and Cornwallis described him as his greatest plague.
Marion was equally ruthless and sneaky, and was given the nickname “Swamp Fox,” because he’d  hide his men in the swamps and ambush the enemy.
Is it my imagination, or do these guys look as if they could be brothers?  They certainly quarreled like many a brother. 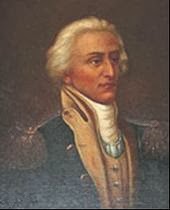 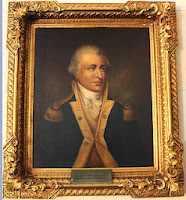 Here they were, on the same side, wearing the same uniform, yet not cooperating, butting heads and clashing egos.   At one point Marion refused to fight under Sumter ever again.  I know it was the painting style of the era, but do either of these fancy-boys look like vicious combatants?
Bob’s grandfather actually bears a striking resemblance to Thomas.  Here's a photo of Ed, and a Rembrandt Peale painting of Tom: 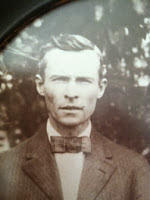 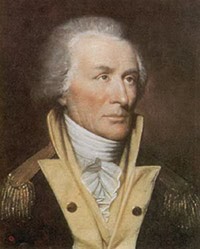 So I had an artist duplicate the painting of Thomas that hangs in the Sumter, South Carolina courthouse. This one hangs in my living room: 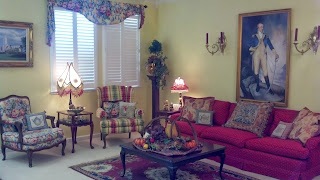 And, of course, now I have to get a painting of ol’ Francis to hang next to it, ideally pointing a sword at Tom.  And there we’ll be, Bob and I, the Romeo and Juliet of the story, something I like to think would have infuriated them most of all.
Hey, if I can be related to Francis Marion, anything is possible.  YOU AND I could be related!  So, as my dear distant cousin, don’t you think you should subscribe to a family member’s blog?