St. Bob and I are in a wrist race.  I had two cortisone shots in each wrist for De Quervain’s Tendonitis and then Bob trumped me yesterday by having actual surgery at the base of his thumb. One of our comedian kids offered to high five him for edging out ahead of me, but Bob declined. 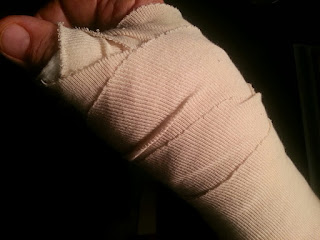 It was outpatient surgery but he still had to go under general anesthetic.  I told him they’d put a wig and makeup on him while under, then sell the pictures online before cleaning him up and wheeling him out.  And, of course we had to take a narcotic pain prescription to the drugstore on the way home.  I left Bob sitting in the car with the windows down while I dashed in.  It turned out my prescription insurance card had expired, so I asked the pharmacist for the number to Bob’s work, since they have a smart phone and I have a dumb phone.  They looked it up.  But then every extension I tried had a recording saying no one was available.  Twenty minutes into this effort I finally reached a human being who said I couldn’t go to that pharmacy anyway, but had to use the new card they gave us a month ago.  It sounded familiar.  I checked my wallet again and, amazingly, there was a card by that very name!  I had no recollection of this whatsoever, but Bob later insisted he had given it to me.  Surely by now he knows not to do these things when I’m not paying attention.  Which is 90% of the time.
So I pulled out the new card and the pharmacist said that yes, they could use it after all.  Sheesh.  I am picturing Bob out in the car, the anesthetic wearing off, crying out in pain and passersby calling 911.  I am also worried about the young man with the clipboard, just outside the doors, who will try to get me to sign a petition to outlaw plastic bags like the one I’m carrying, and am planning how to dash past him to groggy Bob.  Finally the pills are ready and I toss them across to Bob as I get into the car.  We go screeching up to the exit light, at which point I also realize my gum is old, so I ball it up and throw it out the open window on his side, since that’s where some bushes are where my gum will biodegrade and no one will step on it. 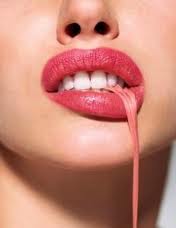 Only Bob has rolled up his window, now.  The gum ricochets off the window, hits the dash, then the seat, then the floor and turns completely invisible.  “Why are you throwing your gum at me?” Bob asks.  But the real question is why did he roll up his window?  Isn’t his right wrist out of commission?  And, I do believe, he’s the one who had the car washed recently and made it impossible to tell that the window is up.  And now I have a ball of gum at large in my car, probably never to be found again.  It is probably lodged under the seat and when someone tries to adjust the seat, the whole works will gum up, literally.
We make it home and I place the pills on the kitchen island.  Bob recalls that in our haste to get to a pre-dawn check-in time at the hospital, we haven’t yet given our dog, Mickey, her daily Prednisone pill for her allergic itching. 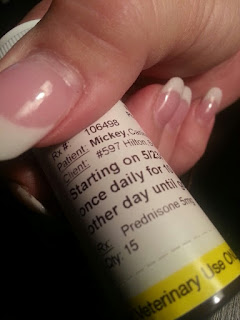 He gets a pinch of a soft cookie and presses a pill into it to disguise it because she’s an idiot and we have to fool her this way. 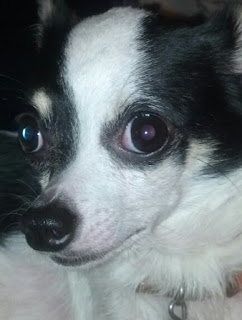 He then realizes that the piece of cookie is too large (Mickey is a Chihuahua mix), so he takes a bite to make it smaller.  He swallows.  Now he looks at the pinch that’s left and realizes there is no little white pill embedded in it.  Furthermore, the bite he took was a little bitter.  HE HAS TAKEN THE DOG’S MEDICINE.  I grab his pain meds, lest he swap those out and kill our dog. 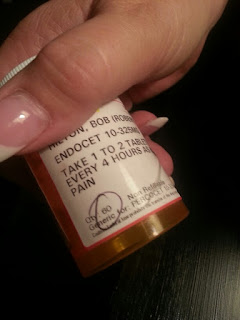 I put him to bed, tell him to stop trying to wiggle the very thumb that is supposed to be immobilized, and keep it elevated, and check my email messages.  There’s one from Bob asking me to sign up for a contest to win a cruise to London, and since I’m the only one of us on Facebook, I have to LIKE the cruise company to enter it.  I scroll to the bottom as fast as I can, because I would love a trip to London, and I press LIKE, just   wishing it could be LOVE.

Only then do I scroll up again and realize Bob has tricked me into signing up for a LESBIAN/GAY cruise, knowing I would never read the fine print.  Well, marvelous.  If I win that thing I’m taking a girlfriend and the joke will be on Bob.  Besides, he has to stay home and take care of his wrist.
Please.  Allow me to prescribe some humor for you.  Simply type your email address into the box at the right, and real-life comedy will pop into your inbox on a regular basis. Laughter is the best medicine, way ahead of dog pills.
Posted by Joni Hilton at 4:00 PM

Email ThisBlogThis!Share to TwitterShare to FacebookShare to Pinterest
Labels: wrist