Don’t even get me started on graffiti. Okay, too late. I’m on a roll. There are about 12 billion reasons why I hate graffiti. Think I’m exaggerating? It costs 12 billion dollars annually just in the United States to remove graffiti.

The main reason I despise graffiti is because it’s vandalizing other people’s property.  Buildings, walls, fences—these belong to actual people. Like snatching someone’s purse, this is taking what doesn’t belong to you. I want to ask these “artists” – and believe me, there are no quotation marks big enough to cast doubt upon that title—how they’d feel if I came over and drew a bunch of Hello Kitty designs on their bedroom walls. Or their cars. Or their front doors.  I’m guessing they’d suddenly see this another way. 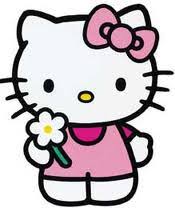 It then causes the owners of these walls to invest in paint and workers to cover up what are often offensive racial slurs, words pedestrians shouldn’t have to explain to their children, and evidence that the neighborhood property values are in decline. 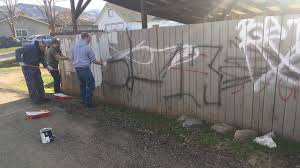 Not only that, but you usually can’t read it!  Most graffiti is written in loopy or angular codes of some kind. Why invest in paint and time if nobody knows what your final result was supposed to say?
Here’s a bunch of graffiti in Norway that is exactly as easy to read as that in the U.S. And it’s in Norwegian! At least the hearts are kind of cute. And the yellow flower. 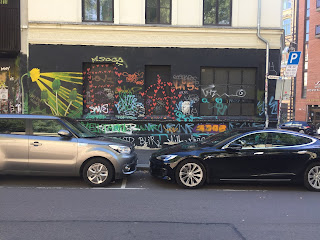 But it’s still not their property to cover with their own ideas of art and design.
Yes, I know gangs like to tag their areas. Then apply yourself, study hard, get gainful employment, and BUY the property. Then you can doodle on it to your heart’s content. But the whole world doesn’t have to support your gang territory any more than we have to honor territory marked by local canines.
I do like what some cities have started, which are graffiti parks and walls designated especially for budding artists. And these are actually a bit intriguing. They showcase amazing graphics, cartoons, air brushing—like a free museum. This is a great way to support local talent, and confine it to a legal space. 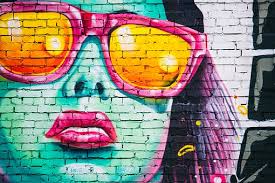 Just don’t do it without permission.
You do, however, have permission to buy my books right here. And then, once they’re yours, you can sketch illustrations in the margins!

Email ThisBlogThis!Share to TwitterShare to FacebookShare to Pinterest
Labels: graffiti