Oh the Tangled Web We Weave

What do you think of when I say the 1920s?  Flappers? Gangsters?  Then you’d be right on the money to attend the recent charity gala where St. Bob and I, plus great pals Nancy and Alex Theriault, went in full costume.
But, being Joniopolis, you know something had to happen. First of all, Bob was the emcee of the event. Excellent choice.  But then I won for Best Costume—not so excellent a choice since now it looks like Bob had a hand in the selection, which he did not. 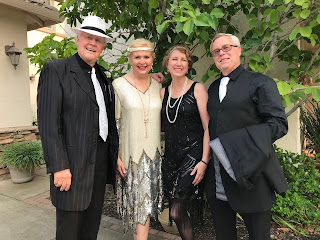 I went up on stage to collect my prize and Bob whispered, “Do your New Jersey accent” as he shoved a mike in my face.  Earlier in the evening I’d been pretending to be a gangster’s moll, and talking with the thick accent I’d seen in the movies.  So I said to the audience, “Dis is da way we Tow-uck!”
No sooner had I gotten back to my seat than a lady dashed by and said, “I’m from New York—we’re taking over!” and I realized that she actually believes I’m from New Jersey and we are somehow compatriots from the East Coast.  Now I’m in a pickle because I’ve evidently passed myself off as an Easterner and if anyone comes up to talk with me I either have to continue this fakery, or admit I was lying up on stage. And what if that woman comes back and wants to find out where I was born?  And what will she think when I say, “San Diego”? Why couldn’t she have spoken to Alex, who actually is from New York?
So now I am sweating in my heavy, sequined dress (which is really from the 80s, but kind of looks like the 1920s—more faking) and I can’t wait to get out of there before my ruse is discovered. Not only that, but I’ve used the dress’s belt as a headband, and who knows how long before it unwinds and I’m like Cinderella falling apart at the stroke of midnight.
Finally we go to the car and I open my prize. And it’s perfect—it’s a bottle of expensive wine which I, as a Latter-day Saint won't use, but which makes a lovely pass-along to our very tolerant friends!
In my defense, fiction writers basically lie for a living. Check out my tales in two dozen books you can find right here.