A Snowball Fight of One

I’m going to go out on a limb here, and guess that you don’t know many people who have blogged about Hostess Snowballs.  And even fewer who have blogged about them twice.  So I think I’m sort of making history.
Or at least I’m making bunny cakes. A couple of weeks ago, for Easter, I made my usual bunny cakes.  Here’s what they look like, nothing the Food Channel would gasp over, but an endearing bit of family tradition: 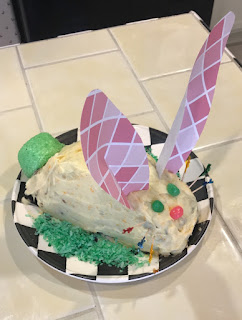 And every year it’s an ordeal to find the “bunny butts” or tails.  Hostess Snowballs must be an endangered species, because I typically hunt high and low before I can find some.
This year St. Bob came to my rescue and offered to go out and find them while I was greasing the pans and beating the batter.  (These cakes are simple to make—you just put two halves of a round cake together and you have the bunny’s body.  Each cake recipe makes two bunnies.) 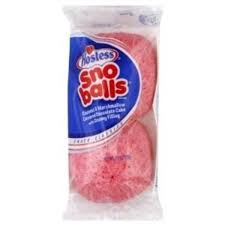 Except the first store where Bob looked didn’t have the snowballs.  Nor did the second store.  Nor did the third.  But St. Bob is a saint, after all, so he would not give up.  Luckily, the fourth store had some green ones.  Unluckily Bob had no green ones as he had left his wallet home.  He asked the clerk if he could buy them with an app on his phone, but she had no idea how to work this.
By now he’d been gone well over an hour and I was wondering what on earth had kept him so long.  I had no idea the tenacity of my husband, hobbling all over town on his replaced knee. Finally a store manager helped him electronically purchase the absolutely essential finishing touch for the bunny cakes and he returned, the victorious warrior.
But he also made me promise to order these a week ahead of time, next year.  Done and done.
Speaking of ordering, have you ordered any of my books, yet?  Waaay more fun than chasing around town for Snowballs.