My Link to Butch Cassidy

I started this blog on the advice of a social media friend of mine, who said my readers would enjoy a peek into my life.  It quickly became a humor blog because that’s seems to be how my life is. And now you know why I mostly write comedy.
But once in awhile, like the time I confessed to loving horse racing, I will admit a thing or two in this blog. And here is another of my secrets: I once slept in Butch Cassidy’s cave.  This is the famous bank robber, far right, in a photo with his buddies: 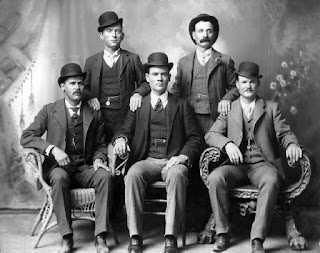 Approximately 300 years ago, when I was fourteen, my Dad led a group of educators on a survival trip through the Moab area of Utah. I tagged along, all skinny arms and legs then, drinking out of puddles and bouncing over boulders in Jeeps.  To call it a rough, treacherous ride would lend it more luxury than it deserves and there were moments when I wondered if the jerking and yanking would knock all our teeth out.
For miles we drove through dry river beds and over sandstone boulders the size of houses, to get as far from civilization as possible.  And then we had a freak thunderstorm.  Suddenly the river beds were gushing with a flash flood of whitewater rapids, and we were trapped.  Ask anyone who lives there and they’ll tell you this can happen within seconds. 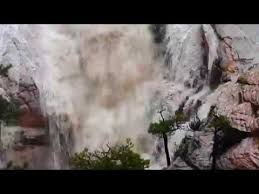 We noticed our forest ranger guides were on their walkie-talkies, and I fully expected them to summon helicopters.  They did not.  Instead, they led us to a cave with old, rusty pots in it and logs fashioned into chairs. They were adamant that we not touch anything, as this was one of Butch Cassidy’s hideouts!  Yes, I got goosebumps.  They were confident that none of us would ever be able to find it again, and they were right.  Evidently only certain officials even knew about it.  We rolled out our sleeping bags and slept like bank robbers.  Or train robbers.  I assume they sleep sound as rocks.
And in the morning, the rain had rinsed the desert, leaving brilliant red sandstone canyons for us to enjoy on the bumpy ride home again.  I don’t know if we were in Robber’s Roost or another spot, but I’ll never forget my adventure.
And just now St. Bob has traveled to Moab to Rally on the Rocks, an offroad vehicle gathering where he experienced similar terrain and scenery. 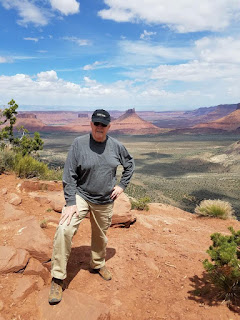 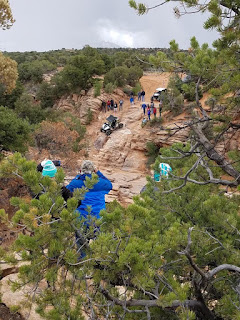 This gives you an idea of the steep surfaces people climb, the rock formations they see, the sudden changes in weather (snow flurries and 35 degrees for him one day), 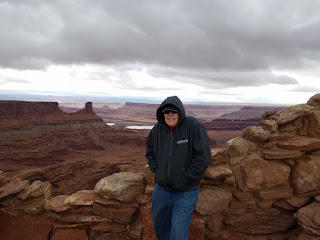 and why robbers were easily able to hide among the canyons here. 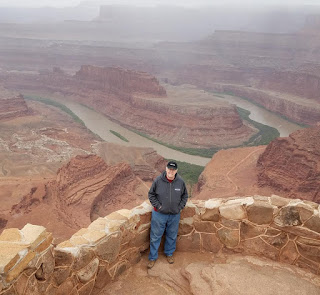 But he didn’t sleep in any caves, much less a famous one.  He had great accommodations and fabulous food. If only Butch Cassidy could see it now.


You can enjoy my books on a vacation, in a cave, or in the quiet calm of your own home.  Order one here today!
Posted by Joni Hilton at 7:00 AM