May I Please Be Excused?

Yes, I got another jury summons. But this time it was at the other county courthouse, the one built in 1898, in Auburn. We all checked in, then filed into the historic courtroom. And here began the TMI portion of the proceedings. The judge asked for people to share hardships if they wanted to be excused.  One by one—in front of everybody—jurors explained their desperate financial plights, their autism, their college class schedule, their divorced ex who won’t help pick up the kids.
“Is there anyone else who can do this for you?” the judge would ask.
One man explained that he had an upcoming surgery scheduled. The fellow next to me whispered, “Is there anyone else who can do this for you?” and we both had to stifle our laughter.
One woman had several health issues to discuss.  “What if you have hemorrhoids or a communicable disease?” I whispered to my new comrade in comedy. “Do you have to tell everybody you've got this creepy goo that keeps coming out of your ears?" We thought of several other awkward excuses.
Surely there’s a better way to allow folks to explain their hardships than announcing it in front of a hundred people. And most excuses are probably legit. But there are also people who just want to get out of jury duty. And that made me think about how St. Bob used to host and announce game shows. There, as well, you have a “pool” of contestants. But not one of them is worried about picking up kids, missing class, or having to reschedule a doctor’s appointment. They’re highly motivated to win money, so they find creative ways to make it work. Here he his, hosting and hugging happy contestants on NBC's Let's Make a Deal: 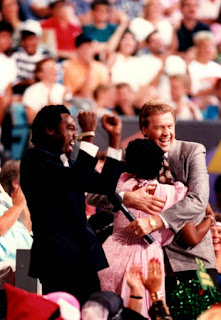 Maybe there should be a drawing among jurors who stay, and prizes awarded.  And I’m not talking about the “Rice-a-Roni, pantyhose, or GasX for bloating” that I heard Bob say so many times. I’m thinking, “You’ve won a BRAND NEW CAR!!” That might liven things up a bit, no?
Okay, it’s not a car, and it’s not free, but my latest book only costs $3.49 and makes a fantabulous gift for adults, kids, your hairdresser, teachers, really anyone on your gift list. Check out A Little Christmas Prayer on Amazon, right here.