It’s summertime.  Okay, it’s summertime in the northern hemisphere.  And that, for many people, means strawberries.
I’ve told you before that I live in the most productive area of the world when it comes to produce.  Farmers’ markets abound, and you can find juicy, gigantic strawberries red to the center.  In fact, California produces 75% of all of these luscious gems. 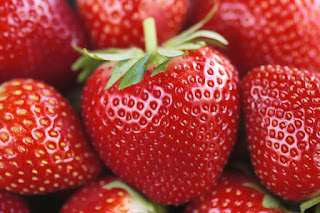 But did you ever wonder how they got that name?  It’s been around for a thousand years, before they were even cultivated, when they still grew wild. So the idea that the name came from the careful placement of straw under the berries to protect them, is out. 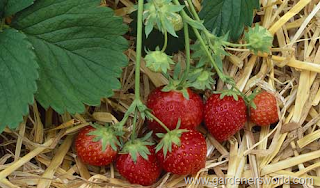 That leaves just two other theories.  One is that the little flecks on them (called achenes) are the color of straw. 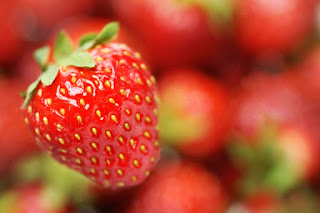 Pretty weak, if you ask me.  You could just as easily call them wheat berries.  Except wheat berries already exist. 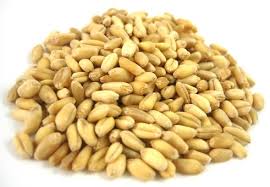 So the last theory is that it comes from “stray” or “strew,” describing the tendrils and runners that seem to spread across the ground. Maybe that’s the best fit, but we’ll never know conclusively.
However, we do know several cool things about strawberries:
1.      They’re the first berry to ripen in the Spring (and maybe we should say the early bird gets the strawberry.  Or the worm gets the strawberry.  I don’t know.  Whoever’s up first.)
2.    They have about 200 of those little seeds on each one.  And they’re the only fruit with their seeds on the outside. (And each “seed” is considered its own separate fruit!)
3.     They aren’t really a berry at all, but members of the rose family, an “accessory fruit,” which stand to reason in my book, because they do kind of look like purses.
4.    One cup of strawberries contains just 55 calories—and more vitamin C than oranges—which is not cancelled out just because you served them with shortcake and whipped cream. Or dipped in chocolate. 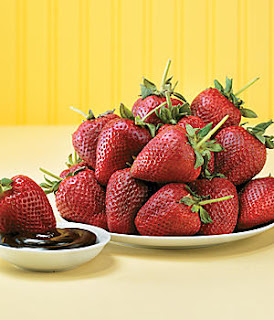 5.     Like most fruit, strawberries taste sweetest when served at room temperature rather than chilled.
6.    They can actually whiten teeth, because the acid in them removes stains.


So there you have it—enough information to entertain your friends as you serve up a delicious STRAWBERRY CREAM PUFF or STRAWBERRY DUMPLING—two of my prize-winning recipes you can find here.  Yummers.  You’re welcome.
Posted by Joni Hilton at 6:30 AM