My cat is an assassin.  I know what you’re thinking—all cats are born hunters, blah, blah, blah.  No; this cat is different from other cats the same way Jason Bourne is different from you and me.
We got Simon from a box of free kittens not realizing that solid charcoal cats with amazingly soft coats and gold eyes are not your basic cat.  They are trained killers in cat suits.  Here’s how I know. Now, not every husband will watch CATS 101 with his wife, which is one more reason why I call mine St. Bob, but we were watching it recently when the show began to describe an unusual cat which was bred by French monks to rid the world of mice.  Evidently these clever monks devised a gene pool that resulted in a cat with superhuman (supercat?) abilities, which—and I am a witness—include defying gravity.  It’s called a Chartreux.  Great Scott—we adopted a serial killer! 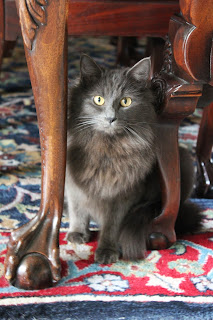 I was in the back yard gardening when I saw a dark flash zip by, heard a thud, and then saw Bob dash into the bushes. Soon Bob came out, sputtering, “How does a cat run faster than a bird can fly?”  Simon had kept pace with a flying bird, leapt into the air to smack it sideways into our fence, and then pounced on the stunned creature once it hit the ground.  Bob rescued the bird and released it as soon as it regained consciousness.  I’ve had cats all my life and I have never seen one that zig zags through the air to follow his prey as if tethered to the actual bird. 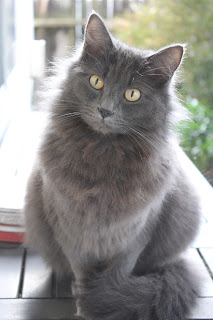 And mice have no chance whatsoever.  Even though Simon’s front paws are declawed, it's as if we have merely installed a silencer on his gun.  It has not impeded his hunting ability one iota. He climbs trees and jumps over 8-foot fences as if they’re toys he ordered on the internet.  The other night we decided to dine with dinner guests on our patio.  No sooner had we started our meal than Simon came jogging around from the side yard with a huge mouse in his mouth, the rodent’s tail swinging from his jaws.   Just what you want to delight visitors.  So, amid squeals of disgust from our company, he proceeded to place the mouse on the lawn and lay on it, holding it beneath him.  Then, eager for a literal game of cat and mouse, released it, at which moment it dashed up our 9-foot arbor, which is covered with a lush grape vine this time of year.  Simon kept pace and climbed right up the arbor after it. 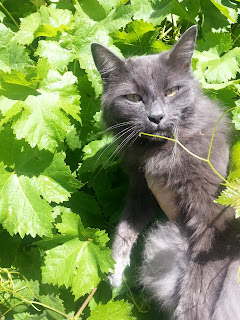 Oh my gosh; this is like Hickory Dickory Dock.  Only worse. I tried to distract our guests from the unintentional entertainment, but their jaws had dropped as they watched Simon scale the iron arbor in one second flat, then perch on top, wild-eyed and bloodthirsty. 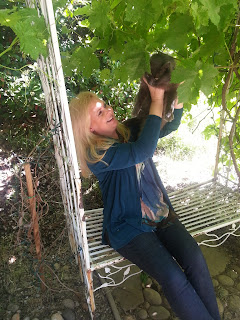 And heaven help any birds who build nests in our trees and then try to boot out their youngsters.  Those poor things will fall right into the waiting jaws of Simon, who has learned to bide his time under vines frequented by hummingbirds, and branches frequented by everyone else.
Disgustingly, like all cats, he brings in his catch as if it’s a gift.  But how is it a gift if all that’s left are the beak and some feathers?   If we lived in an agricultural area, he’d probably be dragging in the remains of goats and pigs. 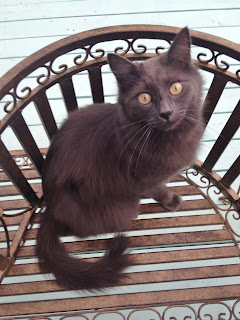 Years ago Bob said to me, “If I hadn’t married you,” and paused.  I was sure he would then say, “my life would have had no meaning.”  Or “I’d have missed out on the best woman in the world.”  Or some other romantic ending.  But no.  Here is what he said in total: “If I hadn’t married you (pause), you’d be one of those women with forty cats.”  Nice.
And maybe it wouldn’t have been forty.  Maybe four or five, I’ll admit to that.  But not if they were Chartreux’s.  One is definitely plenty.
Posted by Joni Hilton at 9:25 PM

Email ThisBlogThis!Share to TwitterShare to FacebookShare to Pinterest
Labels: cats