There are three things in life that I consciously—and wisely—avoid: Cookie dough, jigsaw puzzles, and horse racing.  Cookie dough is self-explanatory.  If it’s in my house it’s soon in my stomach, and then finds its sneaky way to my fat cells.  Jigsaw puzzles turn my focus knob to “fanatical” and once caused me to miss an entire Thanksgiving.  And horse racing, well, that’s what this post is about.  (“Post,”I might add, is also a horse racing term.)

Last Friday my husband took me to the races.  Literally.  Okay, first we went to a business meeting, but enough about that.  He THEN surprised me with an afternoon at Golden Gate Fields.  Now here is something almost no one knows about me: I secretly follow the Derby and cry and go crazy whenever I see a horse race. If I were a gambling woman, which I am not, I’d be staggering around like a floozy at the tracks, betting on every race and talking about horses with all the other addicts who play the odds and have their bookies on speed dial.

For 26 years Bob has had no idea.  Oh, sure, the kids know my big parenting regret is not teaching them how to ride, they’ve seen me cry at War Horse and Secretariat, and they know I had horses as a kid. But they have no idea that I’ve deliberately avoided the tracks because I am totally obsessed with these majestic creatures.  Even without gambling, I could become a race horse junkie.  So I limit it to the Derby and I swoon watching them head into the stretch.  And then I put it away for another whole year.

Until now.  This year I was already in bed when Bob came into the bedroom reading the news on his smart phone and said, “Guess who won the Kentucky Derby?”  He caught me with my guard down and I said, “Orb!  And he came from behind and won by two and half lengths—you should have seen it; everyone was covered in mud!” Oops.  Now Bob was staring at me.  “Do you know who the jockey was?”  I did.  “Do you know who came in second?” I did.  Bob was thunderstruck.  My cover was blown.

I nodded, and happy tears fell down my cheeks as I described how Orb was on the outside, yet took the lead in the last few seconds.  What I didn’t know was that Bob (St. Bob, remember) began immediate plans to take me to a race in person.  And that’s how we found ourselves dining in the Golden Gate Fields restaurant and watching race after exhilarating race, mostly on dirt, two on turf.

At one point Bob went to the restroom and came back almost shouting, “Best View From a Men’s Room!”  I figured this couldn’t possibly be the name of a horse, and, thankfully, I was right.  Instead it was a fact, as Bob had captured on his cell phone:  A sweeping vista of San Francisco, the Bay, and the Golden Gate Bridge. 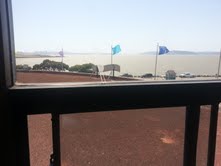 After our meal we headed to the elevators to get a closer look at the horses.  Along the way we encountered lots of women in dresses and hats, and several young men who fancied themselves fancy in fedoras and sunglasses.  We found the paddock where the horses parade by, almost close enough to touch. One horse, in particular, caught my eye.  “Look at Number Nine,” I said.  “He’s going to win.”

“Look at his gait,” I said.  “Look at the energy, how he keeps jerking his head towards the track.  He can’t wait to get out there.”  His name was Frank and Go, and he was an exquisite thoroughbred, the color of dark caramel, his muscles gleaming, his proportions perfect.  I asked Bob to snap some photos.

We watched from the railing as the race began and my heart started pounding.  The cluster of horses rounded the curves in perfect unison, as if on wheels.  And then as they neared the finish line the crowd was screaming and it was clear: Frank and Go was leading out.  Frank and Go won! 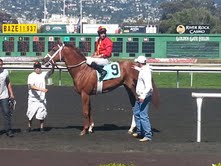 That night I spoke to one of our sons and told him Dad had taken me to a race track that day.  “Wow,” he said, “That’s random.”  Yep.  They still have no idea. 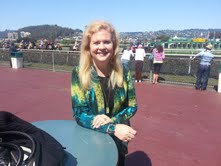 Here's a race anyone can win-- race your mouse over to the box on the right, where you can subscribe and keep these posts winging their way into your inbox several times a week.  Odds are you'll laugh yourself silly.
Posted by Joni Hilton at 8:54 AM

Email ThisBlogThis!Share to TwitterShare to FacebookShare to Pinterest
Labels: horses