Nobody likes their driver’s license photo; I get that.  But still we are asked to show these IDs at banks, stores, and airports, and we do it without much angst because we’re all in the same boat. 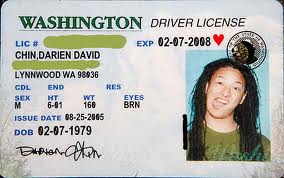 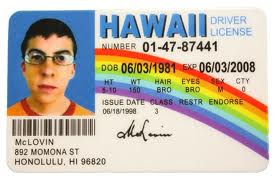 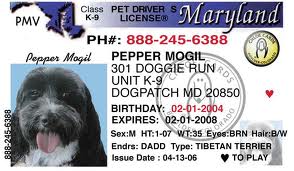 Until now.  I have jumped overboard, my friends.  Over into the sea of INSANELY HIDEOUS PHOTOGRAPHY.   For the first time ever, I am considering paying the extra fee for a new picture, or getting a separate ID entirely.  I guarantee you cannot beat this story. 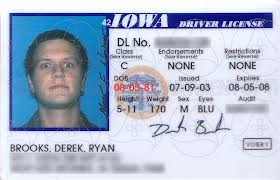 Normally the California Department of Motor Vehicles (DMV) mails me my new license every year three years, for being an exemplary driver.  What do they know?  But they do it.  Years go by.  Finally I have exceeded not the speed limit, but the time limit, and they write to say I must re-take the vision test.
No biggie.  My hair is up in a messy bun after a morning of housework, and I’m not  wearing any makeup except for some lip gloss.  I’ve thrown on an old T-shirt and some jeans, but since it’s only a vision test and thumb print, I’m not worried. I grab my daughter, Nicole, and we zip over to the local DMV.
Wisely, I have made an appointment.  This saves the local news from having to cover a mass homicide.  CRAZED MOTHER OF FOUR TAKES OUT 42 CITIZENS AT LOCAL DMV.  I am not good at waiting two hours in government offices. 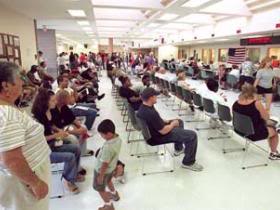 Sure enough, I’m called right up to Window 15 for my vision test. I pass with flying colors.  And then, in a horrible twist of fate, the gruff woman behind the counter tells me I have to get a new picture!
“No, no,” I explain.  “The letter just said vision and fingerprinting.”
“It also said a photograph,” she argues, and even though she has not read the same letter I have received, I do recall a bit of fine print at the bottom that I skimmed, so I decide not to wage a war over this.
I take my hair out of the bun and shake it loose.  It looks worse. I also have an immediate hot flash that leaves my skin as shiny as if I had smeared it with Vaseline.  (Why can’t there be cold flashes?)  Nicole frowns; she is better than any mirror.  The woman snaps my picture and I step away for the next impatient person to have their turn at a mug shot.  Nicole says, “You have a piece of chocolate on your lips.”
What?  I reach up to pull it off and it isn’t chocolate at all, but a BIG BLACK GNAT that has flown into my lip gloss, choked on it and died. 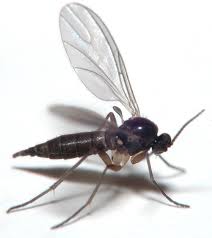 Now I realize that my new photo is  going to look like a drenched, squinty mole who has just gorged on a wad of greasy cheese, with hair looking like I’ve got my toes in a light socket and am being electrocuted, and with a BUG stuck to my lips! 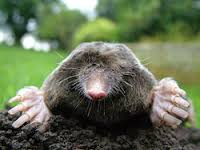 “I am shredding that thing the second it arrives,” I say to St. Bob after I get home.  “I’ll have to call and reschedule another picture or something.” And here’s where he tells me it’ll cost big bucks and they’ll still probably use the same photo.
Sure enough, the license arrives in the mail and looks even worse than I had imagined.  Picture the same electrocuted mole wearing the fright wig, shiny face filling the frame, and a big black smudge on its lips, like a mug shot of a drunk who chews tobacco and can’t keep from drooling.
Naturally my family is no help.  They call me “Bugsy,” they suggest other creatures that could get mired in my lipstick, they compliment my “gnatty” attire.  Finally they email me the poster of Jodie Foster with a butterfly on her lips from the movie, The Silence of the Lambs, and wonder why I didn’t choose that insect instead. 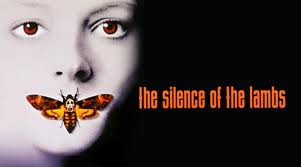 And no, I am not going to post my photo here, you’ll just have to imagine it.  And be grateful, at last, that your photo is infinitely better.
This true story worked its way into my book, “Funeral Potatoes, The Novel,” which you can buy here: http://amzn.to/15OZcgq
Posted by Joni Hilton at 7:00 AM