Get Your Feet Off the Table!

Ta-da!  My latest decorating project is finished.  You know I love McKenzie Childs style, right?  I shared my nod to that when I repainted my grandfather clock (and decoupaged the courtly checks) a couple of years ago: 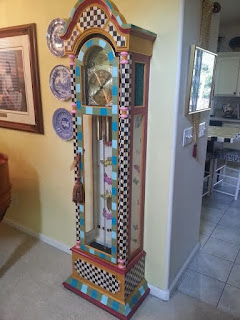 And you can read more about that here. So a couple of months ago I took the leap and decided to re-do my coffee table in the same style.
First, you should know that this table has been needing work for years.  Some time ago someone (we will never know the guilty party) tipped over a scented diffuser that was sitting there on a runner.  They didn’t report the spill and it was days before I moved the runner and saw the entirely gouged and eaten up finish.  Needless to say, it’s been covered with various disguisers ever since, from runners to tablecloths.
But the time had come, and I took the bold leap.  I sanded and primed it outside in the cold (bundled up but still cold!) then dragged it in, put down a drop cloth, and began to paint.  I decoupaged courtly check wrapping paper on the sides and painted a border of the colors and stripes so familiar to fans of this home décor line. 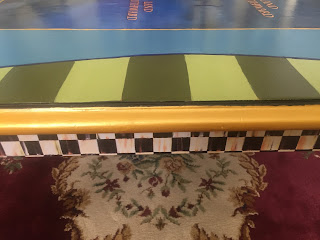 Then eldest son, Richie, suggested a map of Book of Mormon lands for the center, and I found one online.  For non-Mormons I should explain.  The Book of Mormon goes hand in hand with the Bible and is another testament of Jesus Christ. It details his visit, after his resurrection, to people in the Americas. Nobody knows exactly where this happened, but scholars like to guess Central and South America.  Some folks have even ventured to speculate about where various settlements and land forms were, thus various maps have sprung from daring minds with artistic ability.
Needless to say, our officious Chihuahua Terrier mix--a Taco Terrier-- Mickey, had to supervise.  But here’s what she does.  She knocks the throw pillows off the sofa, then leaps from pillow to pillow until she finds one she likes.  Like Goldilocks. (This is the same brainiac who growls at her reflection in the oven door, thinking there’s another dog in the oven looking back at her.) Here you can see her on her perch, the table still a work in progress. 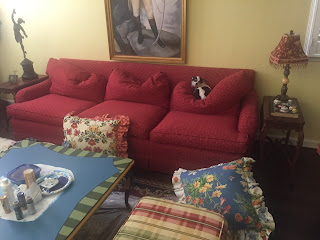 Then I varnished the whole thing and now it’s done!  Here’s the final result. 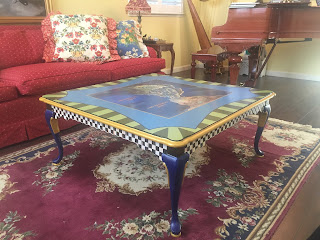 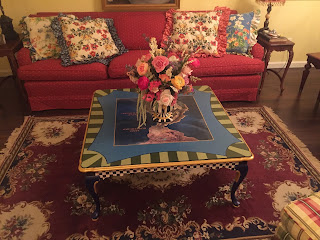 At least until Mickey gets to the pillows.  Now I think I’ll sit down and put my feet up…
You do the same—and curl up with one of my books!
Posted by Joni Hilton at 7:00 AM 6 comments:

Okay, folks, I know you love Christmas.  I love Christmas.  But you've got to take down the tree and put away the decorations.  Many of you have already done this, but for those who are still reluctant to put away that last string of lights and that last reindeer yard ornament, I have a way for you to know if you have taken Christmas just a notch too far this year. Here's how to know when it's time to downsize your holiday-a-holic problem:

1-     You worried that you wouldn’t find enough goodies for the parakeet and hamster stockings.
2-     You dressed all your pets in little Santa suits. 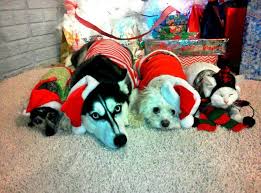 3-     You have dedicated your entire garage to the storage of Christmas decorations and now there is no room for a car.

4-     You agonized when the postage stamps didn’t match your Christmas cards.
5-     You tried to make homemade candy canes. 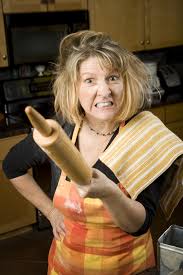 6-     It took you a solid week to put up all the lights on your house.
7-     You made a doll-house sized gingerbread house, completely filled with gingerbread people, furniture and appliances.
8-     You crocheted covers for your Christmas lights. 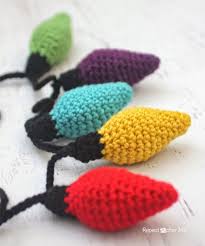 9-     You made your Christmas feast fit each of the Twelve Days of Christmas, including partridge soup and golden onion rings.
10-   You painted all your trees and bushes white, so it would look like it just snowed.
11-  You couldn’t find a place for the elf and reindeer figurines, so you put them in the manger.
12-  You climbed up on the roof to jingle some sleigh bells, fell off, and broke your arm (and then you had a Christmas-themed cast put on). 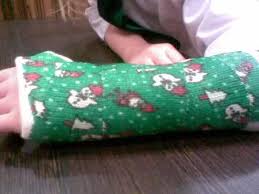 13- You are troubled that this list cannot be sung to any popular Christmas tunes.
Although it's perfectly fine to start Christmas shopping for 2018 right now-- may I suggest a wonderful selection of my books?
Posted by Joni Hilton at 7:00 AM No comments:

I know I’ve been writing a lot of blogs about St. Bob, lately, but if you don’t want to be in my blog, stop providing so much material, right?  And, actually, he doesn’t mind appearing here.  It’s like I’m writing his biography for him.
So, did you know that St. Bob has been an actor as well as all the other amazing things he’s done?  Quite true.  Starting in his teens in community theatre, he played Riff in West Side Story and then Biff in Death of a Salesman (I sense a rhyming trend here, don’t you?)  I also wonder if the reason only one of our sons is married is because he found someone named Tiff.
Bob went on to appear in various TV shows, including the Emmy-worthy moment when he said, “He got away” on Hawaii Five-O back in the late Sixties. I wonder if his character’s name was Ziff. (Five-O actually equals 5, but Hawaii 5 just doesn’t sound the same.  Nor does it depict our 50th state.) 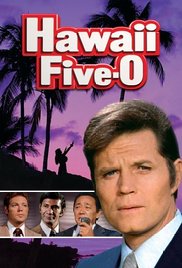 And, for this illustrious moment in dramatic history, Bob occasionally receives royalty checks.  I am so hoping this will continue long after we’re gone, and that our children will be able to inherit this phenomenal cash cow.
Here’s the stub of his most recent check.  You’ll notice his payment--ten dollars-- circled in red. 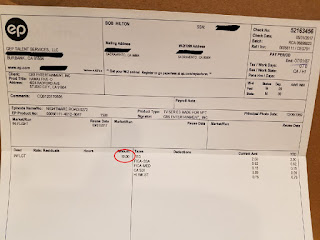 Yes, folks, show biz is a remarkable thing. Between this windfall and the occasional 67-cent checks for various game shows he’s hosted, we will be able to visit the current Hawaii Five-O in person!


You, of course, can subsidize my tropical dreams by purchasing my books right here.  I’ll even eat a pineapple in your behalf.
Posted by Joni Hilton at 7:00 AM No comments:

Is This What St. Really Stands For?

Two weeks ago I blogged about how lucky I am and whataguy Bob is, right?  So I think I’m safe sharing this latest moment with you. After all, even when we love each other, we all have times when we can also laugh at ourselves.  At least I hope so.
St. Bob and I were driving past an outdoor café, and this is what Bob saw out his window (except the ones we saw were black): 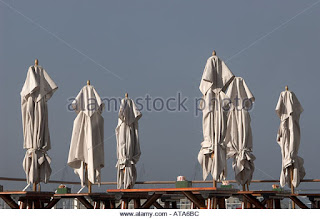 “What are those people doing?” he gasped.  I looked over, saw the black-robed creatures and then looked at Bob to see if he was joking.  Nope; he thought these were some kind of scarily-clad individuals. Were they protesting? Holding a meeting?  Staging a takeover of the local sushi joint? 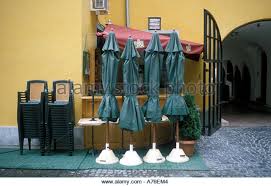 I waited for it to dawn on him that these were patio umbrellas, then said, “You’re so cute.”
He smirked.  “Is that cute spelled with an S?”
I laughed.  “Followed by a  t, u, p, i, d?” Then it occurred to me: What a perfect explanation for his nickname, St. Bob.  We can just say St. stands for, well, something else.


But you can get actual saint status by ordering my books right here! There’s something for everyone; scroll through and start the New Year right!
Posted by Joni Hilton at 7:00 AM 3 comments:

You knew, sooner or later, that if I have a humor blog I’m eventually going to write about monkeys, right?  I mean, what’s funnier than monkeys?  And what’s more FUN than a whole barrel of them, right? 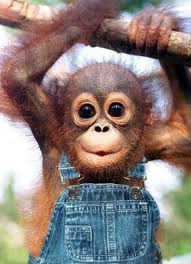 But I’ve been thinking (sometimes a risky venture, but stay with me). The phrase, more fun than a barrel of monkeys has actually been around for more than a century.  And Milton Bradley even came up with a game by that name in the 1960s, implying lots of fun for anyone who played it. 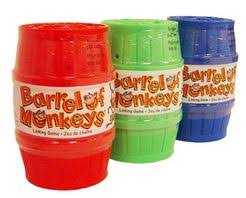 But would a barrel of monkeys actually be fun?  Do you know anyone—anyone at all—who has filled their home with monkeys, because, doggone it, what could be more fun than that?
I know one guy who had one monkey, and of course it’s St. Bob.  When he was young—and I mean seriously young, as in high school—he hosted a cartoon show on television. 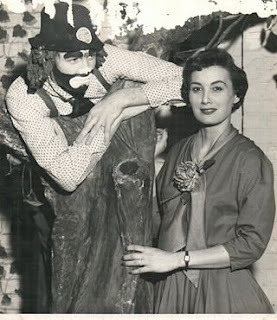 From there he hosted talk shows, then game shows, and the rest is on Wikipedia.  BUT… when still living in Lake Charles, Louisiana, he had adoptable animals on his cartoon show from time to time and decided to bring a monkey home, himself.  It came with a cage, and Bob put it in his bedroom. 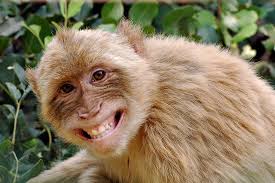 Soon Bob’s father came home from work.  And one thing that’s universal—at least for monkeys—is the alpha male thing, whether you live in Louisiana or India or Costa Rica.  So when Bob’s father walked into the bedroom to see the new addition to the family, the monkey went ballistic. 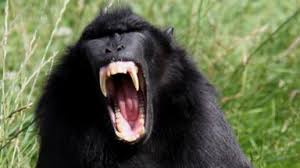 Indelicate language coming up: The monkey began screaming and hurling excrement and peeing in every direction, as if a rotary fan were helping to distribute his opinion.  Apparently it is rather amazing how much opinion one monkey can generate.
And soon the monkey went back to the zoo or the shelter or wherever it came from. No word on how long it took to clean up and recover from the attack, but it’s safe to say that an entire barrel of such creatures would not be as fun as advertised. 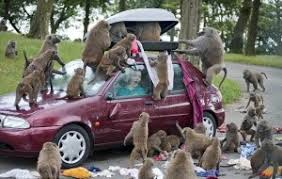 So I looked it up.  And guess what—that phrase began as sarcasm, an ironic reference to anything NOT fun whatsoever.  Over the years, as things happen, we began using the phrase literally, assuming a bunch of monkeys would be all you need for a dang good, memorable party.
Well, I’ll grant you it would be memorable.


Instead of monkeys, buy something much cheaper, less messy, yet still fun.  How about a stack of quiet, safe books available right here?  You don’t need to feed them or clean up after them,  just store them on a shelf.  Easy, peasy, my friends.

Posted by Joni Hilton at 8:38 AM No comments: